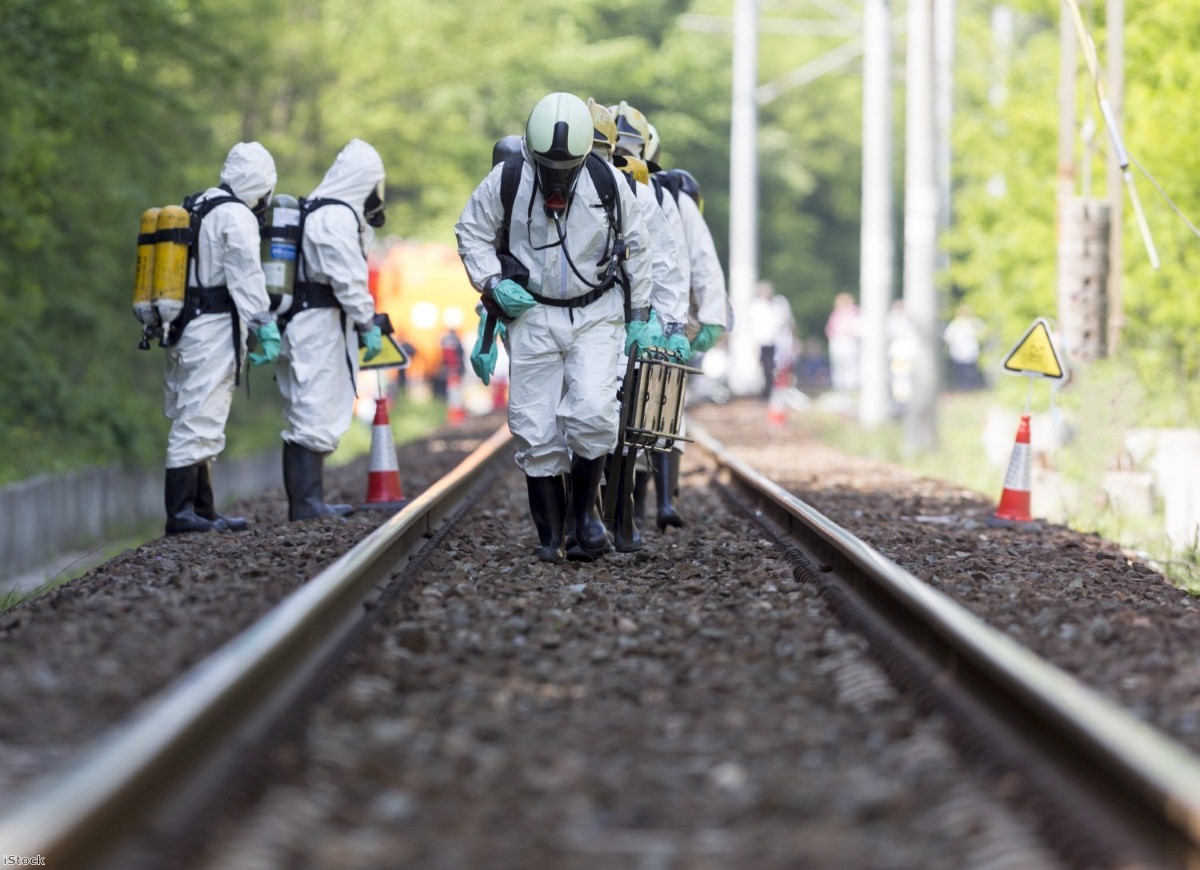 Everything you need to know about Ricin

A 29-year old Tunisian man was recently arrested in Germany, having produced a small quantity of the biological warfare agent ricin. As is often the case with materials of a chemical, biological, radiological, or nuclear (CBRN) nature, the coverage has tended towards the sensationalist. The Times even claimed the alleged attack could have been "more devastating than 9/11".

A rational, proportionate response to these types of events is clearly still beyond more of the media, but we can try. The reality is that ricin is a substance which is more comparable to knives than bombs. It makes it easy to kill one person, but really quite hard to kill several. Here's everything you need to know about what it is and how it works.

Ricin is a naturally occurring biological poison found in the beans of the castor oil plant. Many substances, such as Sarin and Novichoks, are occasionally referred to erroneously as 'toxins', but ricin really is a toxin, being of plant origin.

The chemical compound itself is technically a 'lectin' – a protein that binds with carbohydrates. Castor beans are widely grown and processed around the world for production of castor oil and the mash left over has a small percentage of ricin in it.

In animals, including humans, ricin acts as a powerful poison by interfering with protein synthesis. It is poisonous through injection, ingestion, or inhalation.  Depending on the route of entry, it can cause a wide variety of signs and symptoms. For those interested in the gory details, the New York State Department of Health has an accurate factsheet as does the Organisation for the Prohibition of Chemical Weapons (link).

The key characteristic of ricin – and one that keeps it coming up in the context of terrorism – is its ease of manufacture. CBRN threats are of differing degrees of difficulty to make. Ricin is, by some degree, at the easy end of the spectrum.

Nobody is going to make Sarin or Novichoks in their kitchen or a clandestine drug lab.  The vast majority of alleged recipes for nerve agents in various shady online sources are, mercifully, inaccurate. However, the general process for making ricin from castor beans is, unfortunately, accurate, well-disseminated, and requires only a moderate degree of expertise and equipment. For once, the popular media is broadly correct. Someone capable of making methamphetamine can likely extract ricin from beans. This ease of production is the primary reason why ricin figures so prominently in the annals of CBRN terrorism.

Medical treatment of ricin poisoning is generally supportive in nature. Aggressive supportive care can save many victims, but there is, at present, no specific antidote. Preventive measures and specific treatments have long been the subject of intensive research in military CBRN circles, but none are commercially available.  Decontamination is relatively simple, however. Soap and water for removal of hazards is effective, and household bleach is effective at inactivating ricin. Heat treatment works well, as the ricin protein is inactivated

Has it ever been used?

Ricin was developed in some quantity during and immediately after World War 2 by several major militaries. Practical studies by the US military showed that, as an actual weapon system, ricin was less practical than other biological and chemical weapons for a variety of reasons. From a practical standpoint, ricin was considered far less effective than nerve agents like Sarin, or biological agents like anthrax or botulinum toxin.

Ricin has no reported history of mass or wide area use, but it does have an interesting history of use as an individual weapon. There have been a number of actual and attempted incidents to use ricin on small scale. The most infamous was the assassination of the Bulgarian defector, Georgi Markov, in an incident in London in 1978 by Soviet bloc intelligence agencies. In a moment of peak Cold War era eccentricity, a small pellet containing ricin was fired from a device concealed as an umbrella. Another Bulgarian defector, Vladimir Kostov, survived a similar incident in Paris around the same time.

Since that time, a number of incidents involving ricin have occurred, most of which excited only moderate interest at the time. This Wikipedia page provides a useful catalogue of ricin incidents.

The 1990s saw a rash of them involving individuals in the US. In 1993, a man named Thomas Lavy was caught at the Canadian/US border with a large quantity of ricin. He was later charged with terrorism offences by the FBI and committed suicide in jail in Arkansas. His actual intentions remain unclear to this day.

In 1997, Thomas Leahy of Janesville, Wisconsin, pleaded guilty to possession of ricin. In 1998, three members of a right wing militia in Michigan were found to have a videotape that described the ricin production method, although no ricin was found. Several similar incidents occurred during this period.

Incidents involving ricin in letters sent through the post have occurred in the USA, possibly as copycat efforts trying to mimic the rash of anthrax terrorism which followed 9/11.

In 2003, a letter containing Ricin was intercepted by Federal authorities in South Carolina. More recently, ricin-laced letters were sent to Barack Obama, a local judge in Mississippi, and a Mississippi congressman. The letters to the congressman and the White House were intercepted by existing bioterrorism security processes, whereas the letter to the judge caused no apparent harm despite testing positive for ricin.

Ricin comes up again in the context of the ongoing war in Syria. While much of the concern about CBRN weapons in the Syrian conflict rightly focuses on the use of Sarin and Chlorine, it is now clear that the Syrian government had the capacity to produce quantities of ricin. It acknowledged a ricin production facility, which the OPCW planned to destroy, as revealed in a 2014 document.

Is it a 'Weapon of Mass Destruction'?

Because ricin is technically and legally a biological warfare agent, it is considered to be a 'weapon of mass destruction' under most generally accepted definitions.   However, the physical properties of ricin make it quite hard to use for widespread killings.

It is solid, although you can mill it to a powder. It has no volatility. It does not evaporate. It is less toxic than a number of other biological toxins, such as botulinum toxin. In order to work as a poison it has to get into the human body. In will not absorb through the skin, so it must be injected, inhaled, or ingested.

Ricin is at its most lethal when injected, as with the Markov killing. It is estimated that a very small amount (possibly 250 micrograms for an adult) can kill by injection. But this still doesn't make it very useful for terrorists. It is difficult to imagine scenarios where people form an orderly queue to be injected by terrorists.

A fine aerosol of small ricin particles can be lethal, but the particles need to be in an exact range of sizes, and there needs to be both a mechanism for suspending the particles and the right environment. Without giving up too many trade secrets of the old offensive biological warfare business, getting biological matter into the right size and getting it to behave in the right way for maximum dispersion is both an art and a science, and requires rather a lot of trial and error.

The US Army threw money at this particular problem and gave up with ricin in favour of other things. Putting ricin in an envelope lacks any mechanism to cause an aerosol, other than possible rough handling. This could theoretically pose a hazard to the person opening the letter, but not as a wide-area weapon.

Ricin can kill if ingested, and this is the type of ricin poisoning occasionally seen in non-terrorism contexts, for instance through the accidental ingestion of castor beans. However, based on these accidental poisonings, the median lethal dose is estimated to be as much as 20 mg per kilogram of body weight.

This is not terribly efficient. Physically, it’s the equivalent of one or more aspirin tablets. This is only really viable if you are looking to poison one or two people through their food or water. There are stories of this taking place. A recent incident in Bielefeld, Germany, involved a person allegedly poisoning over 20 of his co-workers over a period of years. Ricin is certainly a candidate for this sort of murderous behaviour on a localised scale.

But if you intend to kill many more people through widespread dispersal in food or water supplies, the mathematics simply do not work. The nature of a municipal water supply means you'd really need a lot of the stuff and even if you succeeded authorities could treat the water using chlorine, which degrades ricin.

Thomas Lavy, the man arrested for smuggling ricin, had a bit more than 100 grams. Certainly, that quantity is enough for mayhem. However, it certainly isn't enough to contaminate a municipal water supply. In the most recent incident in Germany, with the Tunisian national, the suspect had managed to produce only 84.3 milligrams of ricin. Plenty to poison some people by injection, but probably not enough to poison someone effectively at lunch.

In summary, ricin's status as a biological weapon is quite mixed. In terms of actual potential for harm, it is more at the level of knives than bombs. Its status as a WMD is a legal one, not so much a practical one. It would be useful to the public debate and our general social assessment of risk if the media could reflect this, rather than churn out hysterical reporting.