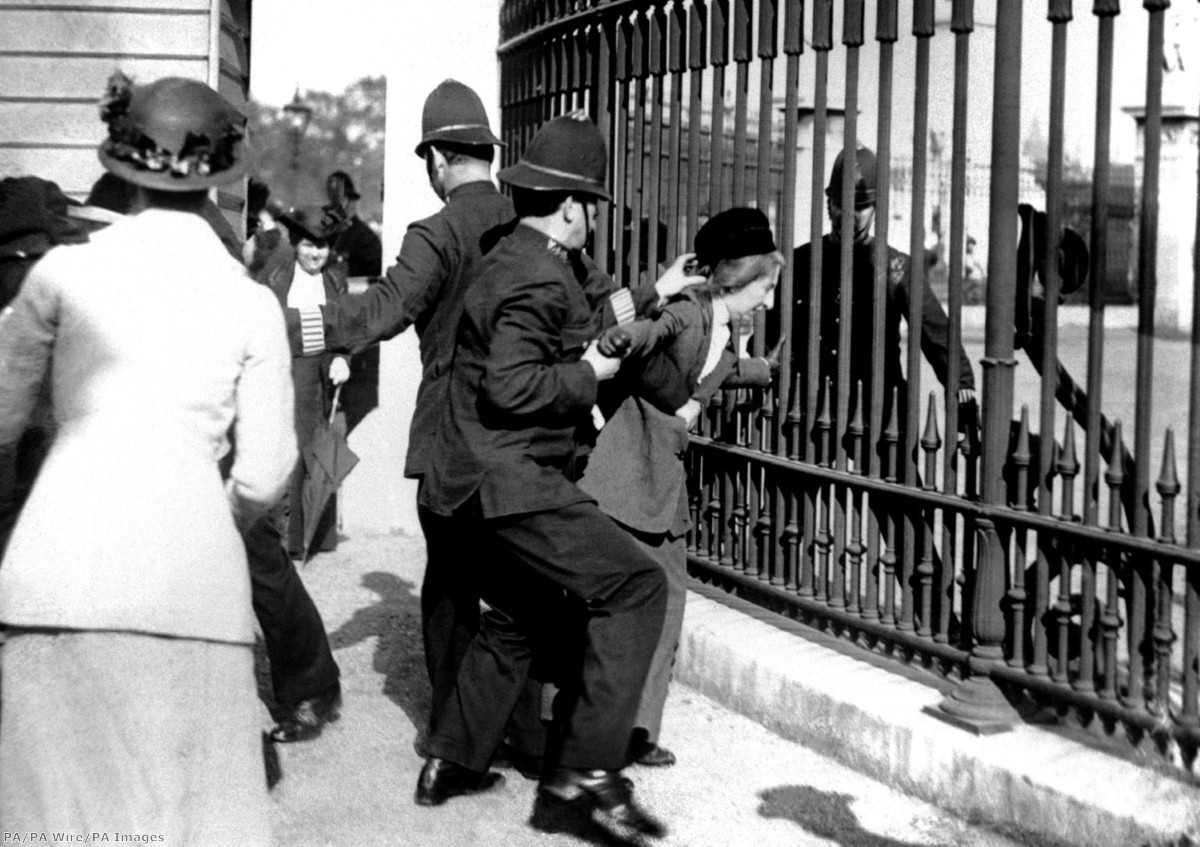 The sexual assault faced by the Suffragettes

Lawyer: "Are you in the habit of carrying a knotted rope?"

Zelie Emerson: "Yes – since my skull was fractured in Hyde Park by a police truncheon I have."

Lawyer: "Is this the sort of thing you carry?" (produces a Saturday Night Club)

Emerson: (Laughing) "Yes, it is a Saturday Night. A very formidable weapon, is it not? But it is not as formidable as a police truncheon."

Zelie Emerson, who had been a labour organiser in Chicago before coming to London to join the push for women's suffrage, had been trying to protect Sylvia Pankhurst from arrest when her skull was broken. Yet the court transcript is suffrage history in miniature: uninterested in the violence committed to Emerson, and only concerned that she had dared to arm herself, a supposedly-shocking thing for an Edwardian lady (even an American one).

It shouldn't have been. Victorian and Edwardian women were well used to self defence. Street sexual assault was a commonplace in the lives of  working class women, who learned early to fight with their fists. As a historian interviewing their grandchildren, I recorded many casual references to aunts or grandmas who were distinguished as the family's "best fighters" and would keep men "away" from the others like unofficial bodyguards. Middle-class ladies were not exempt from public harassment either, women of all classes learned to wield hatpins and 'dagger fans' (exactly as they sound, these were fans with daggers concealed in the handles).

Suffragettes used ropes, umbrellas and even dog whips, and became proficient in jujitsu – and had to, because they were the targets of extreme and sexualised state violence. This is a long way from the cosy, rather comical image of the Suffragette many of us grew up with, what I call the 'Mrs Banks' archetype, after the delightful but ditzy Mary Poppins' character.

This view of the campaign as a middle-class hobby persists, even as we celebrate the centenary of (some) women getting the vote. But it's completely false. Working-class women, Lancashire mill-workers in particular, were prominent in the National Union of Women's Suffrage Societies, some years before the Pankhursts' WSPU.

Another myth that refuses to die is that suffragette tactics were disproportionately 'extreme' and even held back getting the vote. The belief persists that it was 'women's war work wot won it', and not those crazy suffragettes.

What's less discussed is that the women were frequently sexually assaulted, sometimes by police and sometimes by gangs of men, while unable to resist.
In 1907, mounted police charged Suffragettes leaving a meeting in London; women were arrested, and the next day at Westminster police court, according to the Daily Mirror, they were "kicked and struck and trampled under horses' hooves".

Campaigning at a by-election, Emmeline Pankhurst and Nellie Martel were beaten up by a group of men: ‘they beat (Nellie) over the back of the head with their fists’.
Mrs Pankhurst was punched to the ground. pic.twitter.com/RYbygJSOGs

Campaigning at the Newton Abbot by-election the same year, Mrs Pankhurst and fellow WSPU member Nellie Martel were set upon by a group of men, apparently local clay workers, "mad with rage and humiliation". Mrs Pankhurst stressed that she and Martel were not afraid, but took refuge inside a grocer's from a barrage of clay and rotten eggs. The grocer let them out the shop via the back door, but there they were attacked in earnest. Mrs Pankhurst was punched to the ground, and limped for weeks afterwards but resumed campaigning immediately.

At a meeting in the Albert Hall in 1908, 25 year old Helen Ogston was attacked by two men, one of whom burnt her wrist with his cigar while the other punched her in the breast. As she tried to leave she was assaulted by multiple men. Gangs eventually attacked every woman in sight, and Mrs Pankhurst described women after the meeting as "bruised, clothes torn, false teeth knocked out, eyed swollen, noses bleeding".

The press reaction was to note, with excited condemnation, that Helen had armed herself in advance with a dog whip. The crazed 'woman with a whip' image went the 20th century equivalent of viral.

In 1910 on what became known as Black Friday, sexual violence was employed on a mass scale.

The government had reneged on its promise to give a final reading to the Conciliation Bill, which would have given a million women the vote, and 300 WSPU members marched to parliament in protest (including Princess Sophia Duleep Singh, one of many Indian suffragettes, and a thorn in the side of the British royal family). Two hundred of them were beaten and assaulted for hours, with police targeting their breasts and lifting their skirts, making sure the crowds could see the abuse. Georgiana Solomon, widow of South African politician Saul Solomon, was 66 at the time and unable to speak about what had happened to her for a month. Eventually, overcoming her humiliation, she revealed that she was "gripped by the breasts- by no means an exceptional act- … younger women were also assaulted in this and other repellent ways".

"For hours I was beaten about the body, thrown backwards and forwards from one to another until I one felt dazed by the horror of it…I was…pushed helplessly by (my) tormentor into a side street…he beat up and down (my) spine until a cramp seized my legs."

May Billinghurst, a disabled suffragette, was thrown out of her wheelchair by police and attacked, then shoved back in it and propelled into a side street where a gang of men awaited her. The police even removed the rivets from her chair to make sure she couldn't escape. Billinghurst faced them down with such courage that the mood turned and the men assisted her. It was probably a wise move, given that indomitable Billinghurst later worked out a way to use her wheelchair as a battering ram to break police ranks.

May Billinghurst refused to allow her disability to stop her fighting for the vote. The ‘Suffragette on 3 wheels’ rode her special tricycle into the heart of the most dangerous protests. pic.twitter.com/P1G2pbhaV0

The next day, however, The Times spoke of the women's unacceptable behaviour, saying the men present had "kept their tempers pretty well". The Daily Mirror disagreed, writing about the apparent pleasure the police had taken in the violence.

Perhaps the worst ordeal suffragettes faced was force-feeding in prison. Even this could include sexual assault.

As a WSPU leader, Sylvia Pankhurst got the brunt of rough treatment during hundreds of force-feedings. A slight woman, she was held down by 6 wardresses:

"It gradually prised my jaws apart as they turned a screw. It felt like having my teeth drawn; but I resisted—I resisted. I held my poor bleeding gums down on the steel with all my strength. Soon they were trying to force the india-rubber tube down my throat.

"I was struggling wildly, trying to tighten the muscles and to keep my throat closed up. They got the tube down, I suppose…for at last I heard them say: 'That's all', and I vomited as the tube came up."

The Suffragettes came out fighting. They set fire to letter boxes and buildings, which they always ensured were empty first, and broke windows. As far as we know, however, they broke no skulls and committed no sexual assaults.

Suffrage was, in effect, its own war, fought on the streets and prisons of Britain, employing extreme and sexualised state-sanctioned violence; and in which 'delicate' Edwardian women proved by far the bravest and most determined fighters.

Dr Louise Raw is a historian, broadcaster, author of ‘Striking a Light’ (Bloomsbury) on the 1888 Matchwomen’s Strike, and organiser of the annual London Matchwomen’s Festival, which takes place on June 30th in Bow