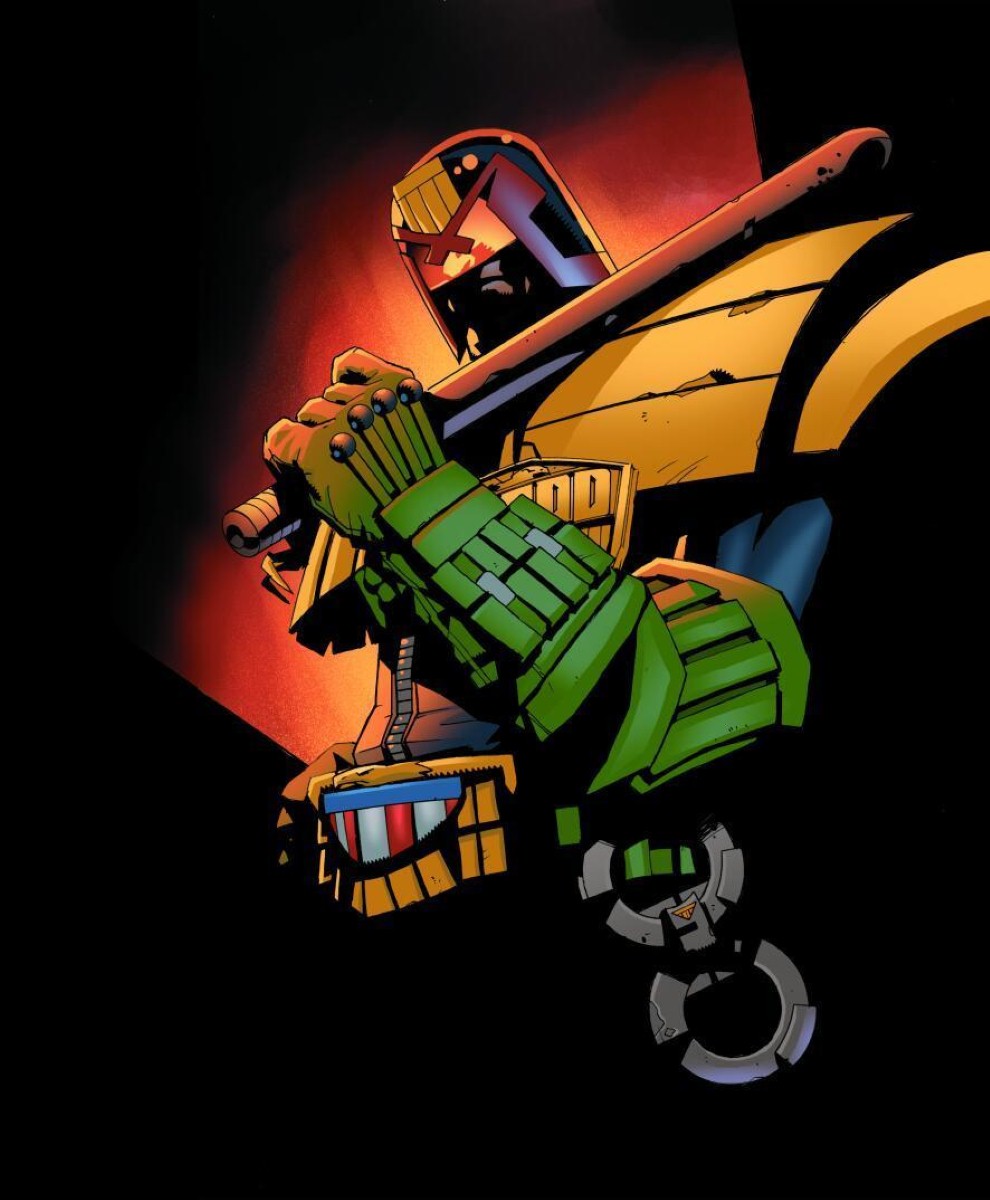 The politics of Judge Dredd

It can be easy to dismiss Judge Dredd. Critics have often turned their noses up at its extreme satire, from morbidly obese activists campaigning for extra food to fads for giant noses and drug-induced ugliness. Just last week, one commentator labeled the comic either a power fantasy for Nazis or a too-subtle piece of lefty irony.

But despite all the absurdities, Dredd remains not only one of Britain's most successful comic creations, but also one of the most relevant sci-fi stories of our time. Here is a comic strip that predicted everything from labour automation to the rise of authoritarian government to the banning of smoking in public. We should be deeply unnerved by how much its writers got right. For a too-subtle satire, Judge Dredd currently seems terrifyingly on the nose.

The character is often considered a reaction to Margaret Thatcher's Britain but he was actually created in 1976 and published the following February. Writers Pat Mills and John Wagner could see the political writing on the wall. Since then, Dredd has gone from a noble, even heroic, guardian who maintains that all are equal beneath the totalitarian boot-heel of the law, to the upholder of a brutalising authoritarian system.

The character is known for his unchanging nature but there are levels of complexity to the way he thinks about the system he upholds. He once walked away from the his job entirely and has, on occasion, fought for remarkably liberal ideals, such as his recent – in  the end calamitous – demand for the repeal of harsh anti-mutant laws. But throughout his publishing history he has remained the embodiment of a dehumanising regime which crams people into mile-high tower blocks and denies them due process, all ostensibly for their own safety.

You can see the political DNA of the character in his ridiculously grandiose uniform. It was designed by Carlos Ezquerra, an artist who lived under the fascist regime of General Franco's Spain and channeled that experience into his work, for instance by emphasising the symbol of the eagle on Dredd's shoulderpad. The combination of silliness and serious commentary is reflected in the scripts, which switch easily from grotesque, satirical farce to moving pathos to police procedural and back again, often in the same story.

Perhaps it’s this combination of absurdity and violence which makes Judge Dredd easy to dismiss.

After all, what relevance could this throwback to the 1970s possibly have for us? What possible lessons could we draw from a city with 95% unemployment due to wholesale automation, harsh laws against outsiders, a giant wall built to keep people out, a slave labour class denied basic rights, brutal and unquestioning law enforcement which presumes guilt, a 'future shocked' population so overcome by the horrors of their world that they turn to anger if not continually distracted by fripperies and fads, a fractured opposition eternally prone to in-fighting, a disinterested electorate which has previously selected both an orangutan and a serial killer for the role of city mayor, and a ruling system so restrictive that it routinely and mercilessly destroys lives without any accountability?

You actually have to try very hard to avoid the parallels between Dredd’s world and our own.

The strip has effectively predicted the rise of Donald Trump not once, but twice.

Consider Robert 'Bad Bob' Booth, the red-necked populist president elected on a tide of jingoism, who willingly antagonised America's allies and enemies before firing off a nuclear arsenal to the cheers of his adoring public. It was in the aftermath of this Atomic War that the Judges suspended the constitution and brought in draconian laws to 'preserve order'.

Consider the blonde-coiffured 'Mad' Chief Judge Cal, the vain, erratic, and gossamer-skinned head of the Judges' Praetorian-like internal affairs division, the Special Judicial Squad, who seized power in a coup. When the citizens refused to turn out as expected to a parade in his honour, Cal suggested he might need glasses because he could not see the adoring crowds he just knew were there. He then sentenced the entire city to death for the slight. Any similarity between this story and a US president obsessing for weeks with how many people turned up to his inauguration is obviously coincidental.

And then there was the vote.

Northern Irish writer Garth Ennis' 1991 story Twilight's Last Gleaming built on the Democracy storylines begun years before by Wagner and his writing partner Alan Grant. Back then, Dredd had gone from executing every pro-democracy terrorist he could find to doubting the system so strenuously that he resigned and took the 'Long Walk’ into the irradiated desert outside the Mega Cities. When he returned, Dredd reacted to growing discontent and pro-democracy protests by forcing through a referendum.

This was a simple yes-or-no vote about which political system should govern Mega-City One: democracy or the Judges. No road map, no plan. Just yes or no.

For weeks ahead of the vote, the polling was clear. The Judges were going to lose. Commentators dismissed the notion that any other result was possible. But when it came to voting day, barely a third of the distracted, politically-illiterate population voted. Those that did overwhelmingly chose the Judges.

A distracted society bored with democracy? An entire nation’s future decided on a single, irreversible vote? An American electorate willingly giving up on freedom in return for authoritarian rule? Who could imagine such things?

Twilight's Last Gleaming was published in 1991. Letter to a Democrat, which kicked off the period in which Dredd was plagued by doubts about the system, came out five years before it. The worrisome 2000s and the frankly terrifying 2010s were years away and yet Judge Dredd was shining an uncannily prescient light into the future.

This supposed relic of the age that brought us Spitting Image and alternative comedy still has a lot to say, but his current storylines are looking still further ahead, to the horror of what happens on the other side of authoritarian government.  After all, fascism is based on the notion that you should give up your freedom for security. What happens when this is exposed as a lie?

The recent Day of Chaos storyline, in which a massive terrorist attack on Mega-City One wiped out much of the population, has opened up a new era for the Judicial system. It showed the Judges' lie for what it was. If they can't keep the people safe anymore, then what use are they?

At this very moment, in the Every Empire Falls on-going series of interconnected stories, Irish writer Michael Carroll is exploring the extremes that a system now weakened and backed into a corner will go to in order to maintain itself. Meanwhile, in the recent Titan collection, writer Rob Williams brutalised Dredd in a way few writers have done before, in order to see just how far such a supposedly noble belief in the law will go.

Back in the real world, social media is often ablaze with people insisting 'we need Judge Dredd' whenever there is any kind of civil unrest in the UK or US. I've spoken to cops at US comic conventions who without irony cite Dredd as a role model, an 'if only' fantasy of what professional life could be. You only have to look at US news reports to see how closely some police forces now resemble their colleagues in the armed forces.

All too often, Dredd’s brutality is excused as "necessary" or with the justification of 'he’s harsh but fair'. Other than harsh, he is none of these things. Ravaged by atomic war and disorder, the people of Dredd's America gave up their freedoms with barely a thought. If you listen closely to the news, you can now hear the type of arguments which were once made in Dredd's world and laid the groundwork for the despotic rule of Justice Department.

Everything is in crisis, they say, but we can be safe if we just give up some small, trifling rules – rules that only the guilty hide behind anyway. If only we believe in the authorities, then they can protect us. Trust in the Judges, citizen.

Dredd's satire now is sharper than it has ever been. And that should scare us all.

Michael Molcher is a comics journalist, and award-winning podcaster and the publicity coordinator for 2000 AD. He has written extensively about Judge Dredd and 2000 AD for Judge Dredd: The Mega Collection from Hachette Partworks as well as for SFX, Comic Heroes, 2000 AD, and the Judge Dredd Megazine. The opinions expressed in this piece are his own, not those of his employers. Follow him on Twitter.