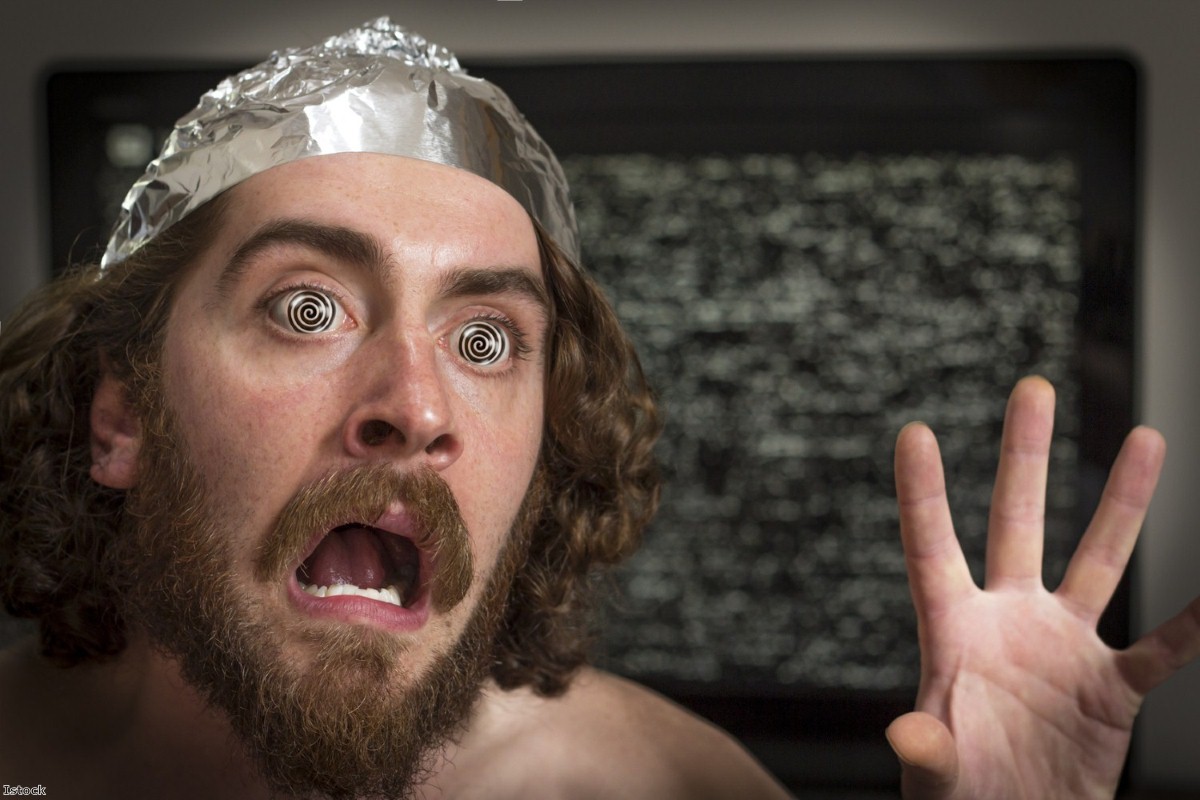 The conspiracy theories pushed by the Brexit campaign

One of the defining traits of those campaigning to leave the EU is an abiding belief that the powers-that-be are conspiring to 'rig' the referendum in favour of Remain.

As polling day approaches, increasing numbers of conspiracy theories are being spread by those wanting to leave the EU. Here are just a few of the most popular.

1. Remainers have planted sleeper agents in the Leave campaign

Widely-respected former Leave campaigner and Conservative MP, Sarah Wollaston, announced today that she has changed her mind and is now backing Remain. The GP explained to the Times that she could no longer support the false claims made by the Leave campaign about the cost of the EU and the NHS. While many applauded her for reassessing her views, others smelled a rat.

"Number 10 planted a few Remainers in Brexit in order to get these defection headlines."

Tory MP @Stewart4Pboro has just retweeted the theory that @sarahwollaston was "a Remain plant" pic.twitter.com/YNFJ2iOCSm

The government's voter registration site crashed in the final hours before the deadline on Tuesday, due to a massive spike in demand. Or did it? Perhaps there was a more sinister explanation.

The Daily Express were particularly concerned, splashing on suggestions that the government were trying to "rig" the result for Remain.

Wait, no not those people. pic.twitter.com/MbTaNqAnZf

"Senior figures were said to think that 'implausibly high' website traffic at 10.15pm on Tuesday pointed to someone deliberately crashing the system," the paper reported.

"They've just told the House of Commons that their website crashed last night because of the high demand," Vote Leave chief Matthew Elliot wrote to supporters.

"But we know that the Government and their allies are trying to register as many likely Remain voters as possible… Whitehall will do anything to stop this country taking back control from the EU."

One Brexit-supporting MP told the paper the decision to extend the deadline was "highly irregular" and akin to the actions of a "banana republic". The head of the Leave.EU campaign said they were considering a legal challenge to the result.

3. Broadcasters are in league with the Remain campaign

The recent ITV 'debate' between David Cameron and Nigel Farage attracted over four million viewers and gave both sides of the referendum debate a chance to set out their case. However, the official Leave campaign were furious about the decision to invite Farage, who is a member of their rival campaign Leave.EU.

Vote Leave wrote to ITV, accusing them of conspiring with Remain.

"ITV has effectively joined the official IN campaign," they wrote, adding threateningly: "and there will be consequences for its future – the people in No10 won't be there for long."

However, it was not just Leave EU who believed the broadcasters were in league with Number 10. Even Farage's own supporters were suspicious. Responding to the debate, Ukip MEP David Coburn suggested that the questions had been deliberately chosen in order to help Cameron.

4. The government is signing up EU citizens to vote in the referendum

Unlike some other elections, only British citizens are able to vote in the upcoming referendum. However, recent reports suggest that thousands of EU citizens living in the UK have been mistakenly sent polling cards by local authorities. But was it really a mistake, or were the all-powerful hands of the Remainers at play again? Some Brexiteers believe they may have been.

"So the electoral authorities are prepared to extend the registration deadline, but are doing nothing about EU nationals wrongly registered," leading Brexiteer Daniel Hannan MEP tweeted yesterday.

So the electoral authorities are prepared to extend the registration deadline, but are doing nothing about EU nationals wrongly registered.

Vote Leave chief Matthew Elliot agreed, telling supporters: "We know that European Union citizens who have no legal right to vote have been given the right to vote and have already voted. This is illegal but the Electoral Commission and the Government are doing nothing about it."

So is this a secret conspiracy to swing the referendum? The Electoral Commission deny it. In a statement last week they wrote that only around 3,000 EU citizens had mistakenly received a polling card. They insisted that none of these would actually be able to vote.

"All of the affected electors will also be written to by their local Electoral Registration Officer with an explanation of what happened and will be told that they will not be able to vote at the referendum," they said in a statement.

5. Experts are conspiring against Brexit

The Institute for Fiscal studies are probably the most-respected economic experts in British politics. Their analysis is regularly quoted by both the government and opposition parties and their sometimes damning, but always impartial reports on the economic plans of various UK governments are required reading for anyone wishing to get a grip on the financial impact of government policies.

So when they released a report last month suggesting that claims by the Leave campaign were misleading and that Brexit would probably cause a big hit to the UK economy, lots of people paid attention.

However, the Leave campaign thought something far more sinister was at play.

"The IFS is not a neutral organisation," the campaign said in a statement.

"It's a paid-up propaganda arm of the European commission."

This belief that economists, who overwhelmingly suggest that Brexit will harm the economy, are secretly conspiring with the EU and the government, has gathered pace among many Brexiteers. Asked about expert predictions that Brexit would decrease GDP, Michael Gove told Sky News:

"I think people in this country have had enough of experts!"

However, one man who hadn't had quite enough of experts was Gove himself, who later claimed the IFS had said that leaving the EU would free up £8 billion to spend on the NHS.

The IFS subsequently released another statement pointing out that this was not what their report had actually said.

IFS release statement saying Gove misrepresented their calculations on NHS Brexit impact in his interview with me: pic.twitter.com/opresLcXto