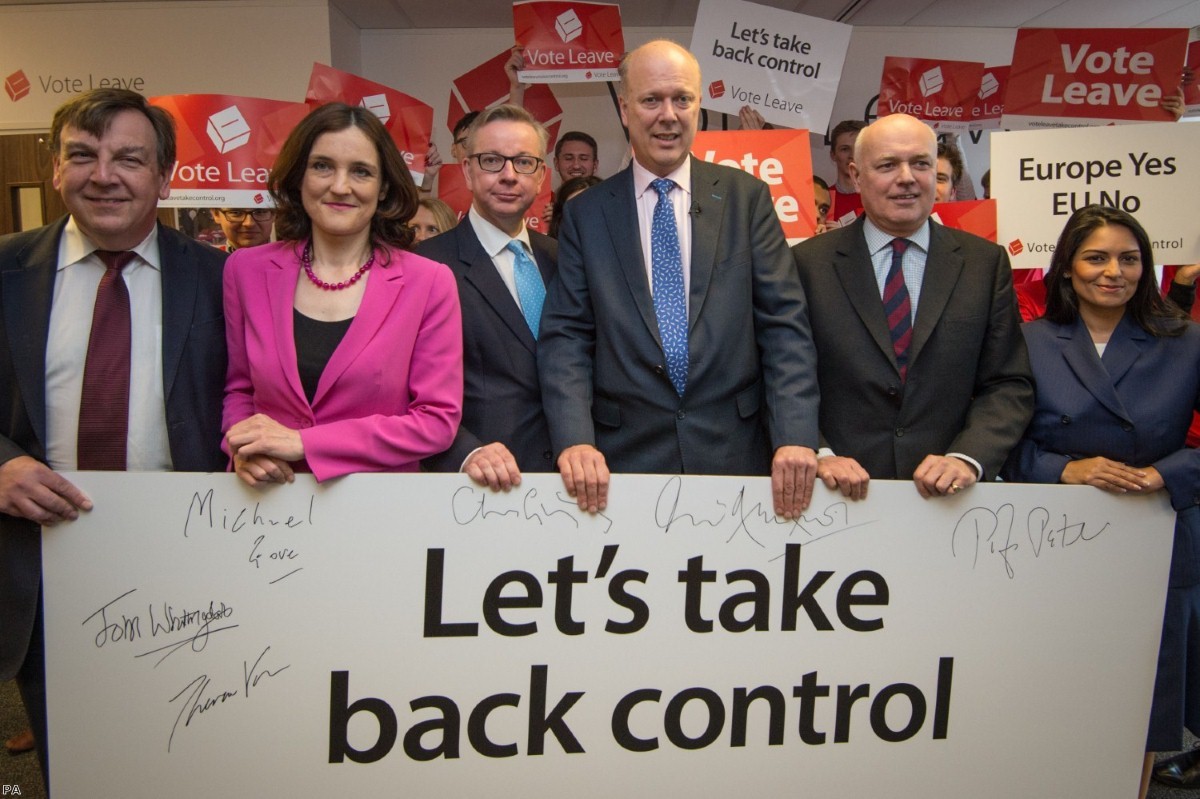 The reasons the Leave campaign are losing the EU referendum

The Remain campaign has so far been endorsed by the prime minister, the chancellor, the leader of almost every opposition party, the chairman of the Bank of England, most leading economists, the vast majority of leading businesses and trade unions and the president of the United States.

The Leave campaign has so far been endorsed by one former mayor of London, a handful of disgruntled cabinet ministers, one eccentric former aide to the prime minister, the seven-times unelected leader of Ukip, and the leader of the French National Front.

To say this represents a slightly unfair fight is an understatement on an almost continental scale. In fact so spectacularly mismatched are the two campaigns, it is less surprising that the Leave campaign are losing, than the fact they are judged to still have any chance at all.

And yet if you look at the opinion polls, there is at least a reasonable chance Britain will still vote to leave the EU. Of the last 15 published polls, seven have put the Leave campaign ahead, with most online polls still showing the race neck and neck. Also cheering the Brexit campaign is the fact that most polls show Leavers are significantly more motivated. A recent British Election study of 22,000 voters across the UK found Leave edging ahead once those less likely to vote were excluded. If the Leave campaign can sufficiently motivate their supporters to the polls, there's still a decent chance Britain will head for the EU exit door.

So will that happen? Unfortunately for the Leave campaign it's looking increasingly unlikely. A series of phone polls published over the past week have shown the Remain camp with a lead of between eight and 18 points. This matters, as all the evidence from the recent local and regional elections suggests that online polls (which have so far been significantly more favourable to Brexit) have been over-representing Brexit-supporting Ukip voters.

As a result of these findings, punters are increasingly putting their money on a Remain victory. Bookies currently rate the chances of Brexit at just 22% – the same odds they offer on George Osborne becoming the next leader of the Conservative party and considerably lower odds than they offer on Donald Trump becoming the next president.

Independent analysts agree. Polling expert Matt Singh, who was almost the only forecaster to accurately predict the outcome of the last general election, suggests that Leave has just a 17% chance of winning. He currently forecasts a Remain lead of more than 12 points.

This doesn't look good for the Brexiteers. In previous referendum campaigns, voters have tended to drift towards the status quo as polling day draws nearer. So with just one month to go, victory seems to be slipping away from the Brexit campaign.

So what exactly went wrong? Here are the three main reasons the Leave campaign is losing the argument.

One of the biggest weaknesses for the Leave campaign is the impression that it is the cause of a narrow and very right-wing slice of the electorate. The leading politicians in the Brexit campaign are almost all either right-wing Tory or Ukip politicians. Throw in the support of Marine Le Pen and Donald Trump and Leave increasingly looks like a campaign run entirely by right-wing ideologues. So far the most well known left-wing member of the campaign that Leave have managed to recruit, is a man who recently won just one per cent of votes in the London mayoral election.

This isn't necessarily a deal-breaker. If every single Conservative voter in the country was joined by every single Ukip voter in voting Leave, then they would probably win. But the most recent polls suggest that while initially heavily eurosceptic, Conservative voters are increasingly leaning towards Remain. If Leave still has any chance of winning then they need to either dramatically turn that around, or reach out beyond their comfort zone of Ukippers and Ukip-leaning Tories. So far they are doing neither.

Polls suggest that dissatisfaction with immigration is the biggest motivator for those wanting to leave the EU. So naturally the Leave campaign is increasingly concentrating on that message. But while this clearly has the potential to maximise the Leave campaign's core vote it also risks putting a limit on the breadth of their support. While scaring voters about millions of Turkish criminals about to storm the English channel may help motivate those already leaning towards Brexit, it also puts off exactly the sort of left-leaning voters the Brexit campaign needs to convince in order to get over the 50% it needs to win.

More than anything else, the Leave campaign's failure to win the economic argument explains why they are losing this referendum. Research suggests that economic arguments are the decisive factor in referendum campaigns. A study earlier this year by YouGov and the political scientist Philip Cowley found that telling voters they will be better or worse off by as little as £10 a week, was enough to alter the outcome of both the Scottish referendum and the upcoming EU referendum. Interestingly, the actual amount of theoretical monetary loss or gain made little difference. All that mattered was the idea that voting one way or another would hit voters' pockets.

The Remain campaign knows this, which is why they have been relentlessly pushing the message that Brexit will cause a recession, decrease house prices, increase food prices and possibly cause you to lose your job. The Brexit campaign have responded to these claims by variously mocking them, questioning their accuracy or even at one point suggesting that such costs were "a price worth paying."

All of this misses the point. For most voters, it doesn't really matter whether Brexit will cost them a tenner a week or £5,000 a year. As long as the consensus view is that leaving the EU will hit their pockets, then a majority of voters will vote to stay in. Simply banging on about abstract notions of 'sovereighnty', or EU regulations on banana bunches, simply won't make any difference. All that matters is the economic argument. Unless the Leave campaign can win that debate, they are doomed to lose.

For this reason, the Leave campaign's claim that EU membership costs the UK £350 million is probably their best card in this referendum. The fact that the figure doesn't take into account either the UK's rebate, or the money received back from the EU, or the wider economic benefits from being a member, doesn't really matter. For most voters £350m sounds like a lot of money and Remain campaigners have always sounded at their weakest when trying to defend it.

There is also still an outside chance that Europe could descend into a new migration crisis within the next few weeks, which in turn could tip the scales towards Brexit. A horrific Paris-style terror attack on UK soil is one other event that could potentially cause a lot of voters to want to raise the drawbridge.

However, as things stand the referendum is the Remain campaign's to lose. So far there's little reason to believe they're going to lose it.