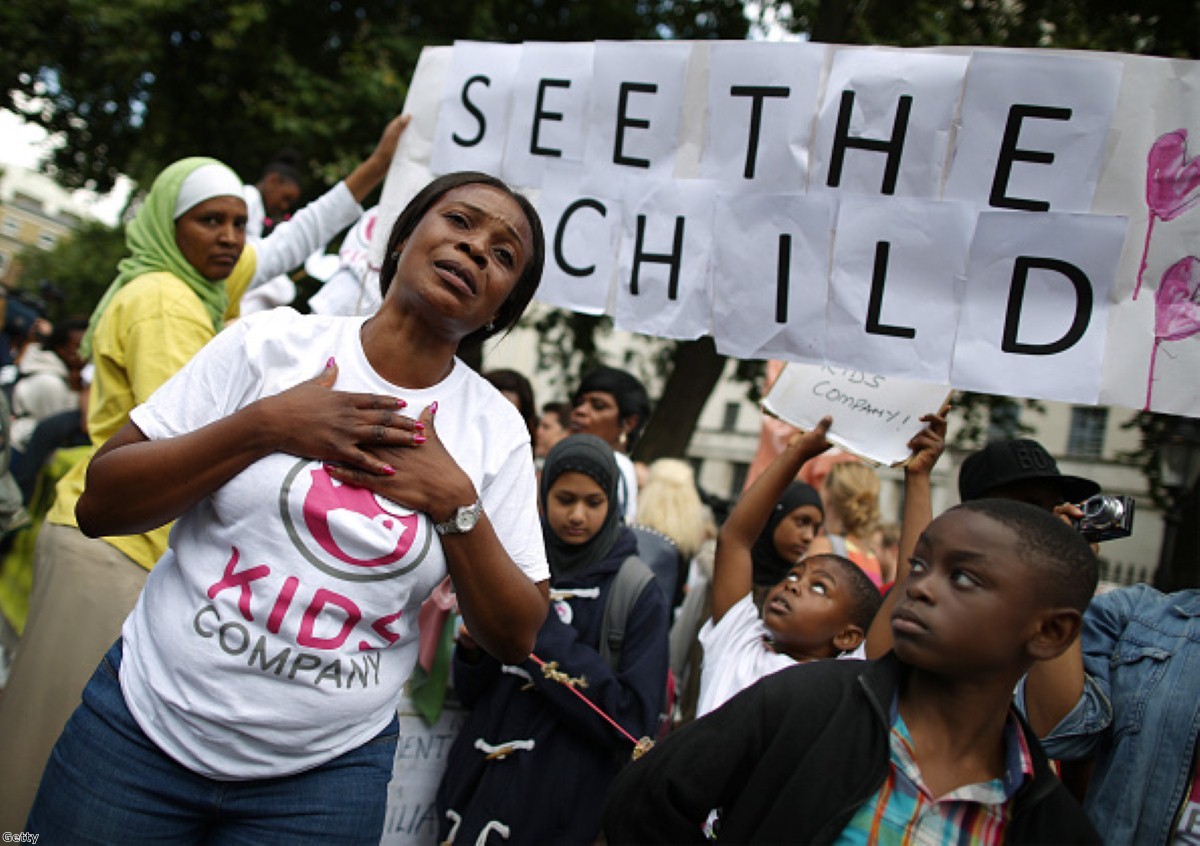 The forgotten kids of Kids Company

Falls from grace don't come much harder or faster than that of Kids Company founder Camilla Batmanghelidjh. Once lauded by David Cameron as an example of how the 'big society' could work, the former charity boss today appeared before a select committee hearing into the collapse of the organisation and its relationship with Whitehall.

After weeks of lurid headlines about allegations of financial mismanagement, Kids Company closed its doors for the final time at the beginning of August.

Last night the charity was under fire again as fresh revelations of alleged poor management were reported by Buzzfeed and Newsnight. Much of the press coverage since the summer, perhaps understandably, has focused on the downfall of Batmanghelidjh. But what about the children left behind?

The government promised in the days after the closure that it would work closely with local authorities to make sure Kids Company users had support. But for its users, help from government was a very different proposition to help from a charity. Many are thought to be too fearful of the authorities to take up the offer.

"We are hearing from lots of people that there is a big gap left by Kids Company," Felicia Boshorin, manager of a food bank in Southwark, says. She's concerned that many users fear losing custody of their children if they tell local authorities of the situation they're in.

"As a Trussell Trust food bank we only offer emergency support up to three times. For many of the people who were using Kids Company, it's regular food they require. We are trying to signpost them to other services but some are too afraid to make contact with government agencies."

Soon after the closure, there were reports that former staff had set up a temporary food bank underneath railway arches to give out food to those who were previously helped by the charity.

For some, it's their immigration status that prevents them from turning to official agencies for help. A blog post by the National Zakat Foundation (NZF) details how a single mother of two contacted them after Kids Company closed. With no recourse to public funds and no permission to work in the UK her only income was the £20 per week given to her by the charity.

Giles Fraser, a South London priest who writes a column for the Guardian, says some local people are concerned by the number of youngsters hanging around outside shops and on estates since the charity closed.

"I'm hearing people talk about the effect it's having," he says.

"I don't know how to access any sort of evidence but Kids Company was a very significant provider of welfare in this part of London so the closure inevitably had an impact."

Well, I have seen what fantastic work Kids Company do with young people round here. They were a Godsend to many.

The Times recently reported that only two people contacted an official helpline which was set up for those affected. Some saw this as proof that Batmanghelidjh had massively overstated the impact the closure would have. But is it really surprising that society's most vulnerable children are not placing much faith in a helpline? Whatever its failings, Kids Company was a major part of the community in South London and its staff built up trusting relationships with many of the young people.

The charity also had branches in Bristol and Liverpool. The Creative Youth Network (CYN) is trying to pick up the pieces following the charity's closure in Bristol but says the amount of help it can offer is limited.

"Whilst we have opened a drop-in again, it doesn't provide the social aspects of the Kids Company drop-in, which attracted larger numbers of young people," CEO Sandy Hore-Ruthven says.

"We are able to work with individuals and groups on the issues they face such as referrals and job searches but we can no longer provide a safe place for young people to attend in the day. It is key for vulnerable young people to have a supportive, safe environment away from crime and other pressures they may feel."

In the month after Kids Company closed, 20 young people approached CYN in some form of crisis – ranging from sexual assault allegations to substance abuse issues. In total the charity has helped an extra 152 young people since August. But a combination of government cuts and a shortage of funding makes its job much harder.

"We have approached a number of funders and individuals but the process is often a long one," Hore-Ruthven says. "We are hopeful but have only secured a small amount so far. As government cuts continue, people are increasingly reliant on charities like ours to provide services for young people who are vulnerable."

London charity Options4Change says it has seen a substantial increase in numbers of people who are destitute since the closure.

"These are people living in the margins and their needs are complex and severe," CEO Donna Sinclair says.

"Our community is very vulnerable since Kids Company closed and lots of people have lost all trust. What we need is clear leadership and a clear strategy. We heard lots of talk from government about the help that would be offered but we are still waiting. They talk about a 'big society' yet they won't provide the resources needed to achieve that."

But not all charities have reported an uptick in demand and local councils insist the number of people needing their help is smaller than expected. Lambeth council deputy leader Imogen Walker, says:

"Lambeth council has been working with local voluntary sector and health partners to support children and young people who used services run by Kid’s Company. The government has invited funding bids towards some of this work, and those bids have now been lodged. Overall the number of children and young people that needed our help has proved to be smaller than we were advised by the charity."

It's perhaps not surprising that reliable information is so hard to come by. Kids Company was a service for some of the most disadvantaged people in society, people often afraid of making contact with authorities. But it seems certain from the evidence provided by charities that many children – perhaps hundreds, perhaps thousands – have lost access to a vital service. For them, the most important thing is what will be be done to fill the gap, not who's to blame.