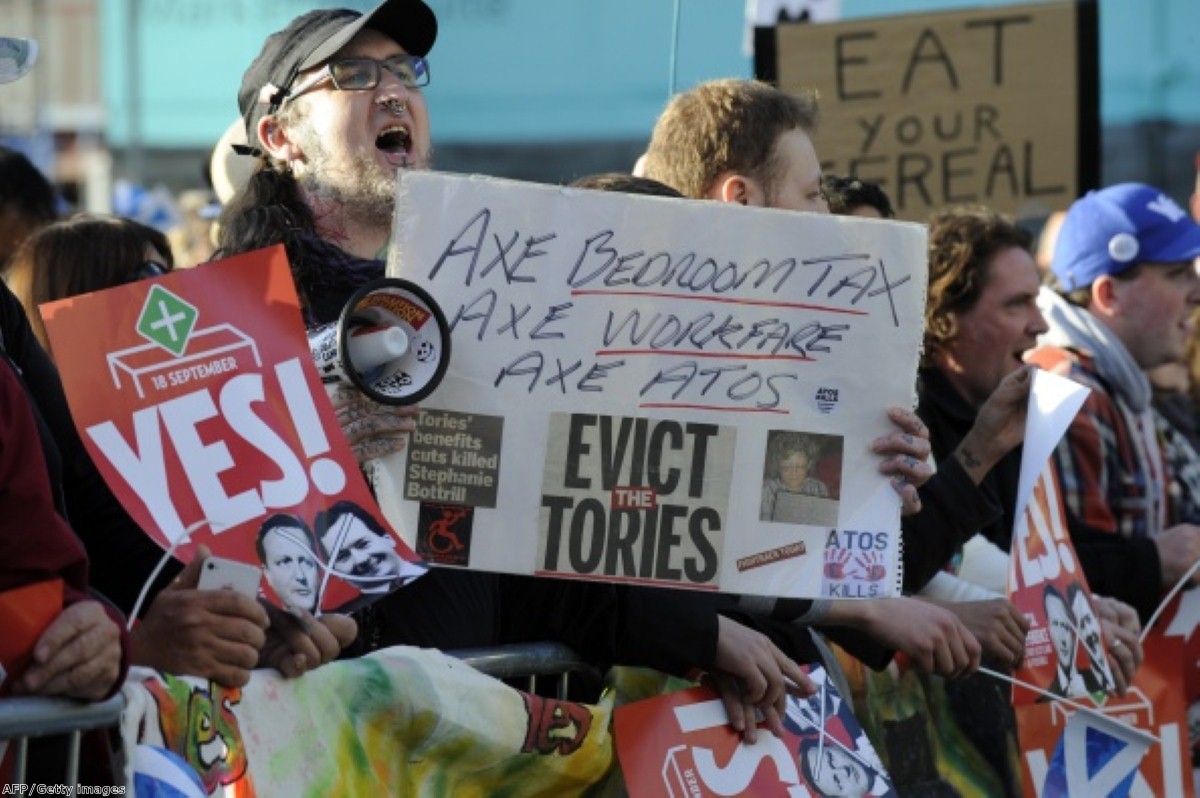 Will fear of the Tories be a decisive factor in the Scottish independence referendum?

If Scotland does vote to break away from the UK later this month, much of the blame will be laid at the Conservative party's door.

Support for the Tories north of the border is at historic lows, with fears about a future Conservative government playing a large part in the latter stages of the independence campaign.

If those fears prove decisive and the Scots do vote for independence, then David Cameron would face immediate calls to stand down as prime minister.

But how fair is this? How much of the vote for independence is simply a vote for Scots to free themselves from the clinches of the Conservative party?

"You can't over-estimate the extent to which your average Scot hates the Tories," leading commentator and Scottish historian David Torrance tells me.

"In her recent debates, Nicola Sturgeon repeatedly brought up Thatcher and the Poll Tax, all of which was a very deliberate attempt to push buttons deep within the Scottish psyche about their fears of a future right-wing Tory government."

This button-pushing is not always explicit.

"The framing is very much about the Westminster system but Westminster here is being used as a proxy for London, the establishment, the City, bankers, The Tories and dare I say it the English in general.

"All of that is quite effective as lots of people in Scotland do not really like those things.

So will this anti-Tory, anti-English sentiment be enough to swing the result of the referendum?

"Generally I've been a bit sceptical about the effect of this as I'm sure most Scots can separate out the two issues [of identity and independence], but it definitely does have an effect," Torrance believes.

So how much of an effect does it have? Recent polls have shown a significant rise in support for independence, coinciding with the 'Yes' campaign increasingly playing on fears of future Tory cuts to the NHS.

So are the two related?

Tanya Abraham from pollsters youGov believes they could be.

"Our polling shows that significantly more Scottish people think the NHS would be worse under the union than if they vote for independence," she says.

So are fears over the NHS simply a proxy for fears over future Tory governments? Torrance thinks the two have been unfairly linked by the independence campaign.

"It's all complete nonsense, because the NHS budget in Scotland is not linked to the one in England and Wales and the NHS reforms in England have not happened in Scotland," Torrance tells me.

"It's all totally spurious but there's evidence that it's working because the average Scot is concerned about these things. The independence campaign is playing on those fears in a very cynical way."

So could those fears, spurious or not, be a decisive factor? Tanya Abrahams suspects they won't be.

"All of our polling shows that the biggest factor for voters is the economy. If they believe the economy is going to get worse, then they will vote on that basis.

"We've seen from our regular trackers that the economy and immigration are typically the biggest issue on a national level and that applies in Scotland as much as in the rest of the UK."

And it is precisely for this reason that the campaign against independence has so heavily concentrated on fears over the future of the Scottish economy.

Those fears appear to be particularly ingrained among the older generation. A recent YouGov poll found that support for independence was in a majority amongst all but the oldest Scots.

And with those voters far more likely to turn out, fears of independence currently look set to trump wider fears of the Tories.

It is for all these reasons that Cameron has appeared so reticent during the referendum campaign.

On the one hand, it's essential for him as prime minister to make the case for Scotland to remain in the UK. On the other hand, he is aware that most Scottish voters simply do not believe what he has to say.

A recent YouGov poll found that almost three quarters of Scottish voters do not trust Cameron's claims about independence. By contrast, 40% of Scots trust statements on independence made by Nicola Sturgeon.

Because of this, Cameron's involvement in the campaign has been decidedly low-key.

"Its always been a difficult position for him because he has to be involved but he and his advisors are acutely conscious of the feeling about him in Scotland," Torrance says.

"So they've done low-key things. He was in Glasgow speaking to the CBI and he was in Shetland which was about as remote as it's possible to get, but he's not about to do a walkabout on a Scottish high street any time soon."

Until this week, this low-key approach appeared to be paying off.

But with the polls rapidly narrowing, Cameron will increasingly find himself under pressure to do everything he can to fight against the break-up of the UK.

The dilemma for Cameron is huge. Get too involved and risk scuppering the campaign, or sit back and risk being seen as the prime minister who let Scotland walk away.

Either way, the referendum result is set to have a major impact on the Conservative leader and his party.