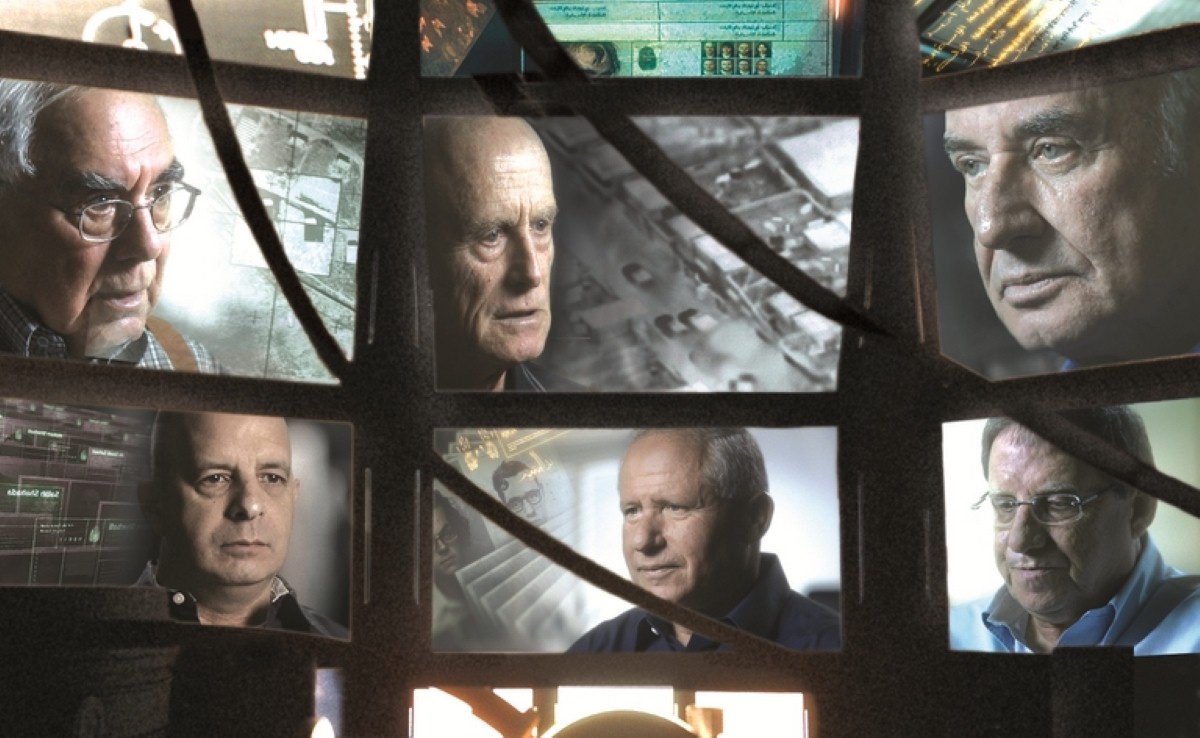 "The Shin Bet are technical experts at making small appliances with lots of power," one of Israel's former spy chiefs says of a mobile phone bomb, his eyes glistening. The comment is typical of the sparse, deliberate language of all the subjects of The Gatekeepers – a remarkable documentary by Israeli filmmaker Dror Moreh which manages the historic achievement of securing interviews with six former bosses of the spy organisation Shin Bet.

This particular head describes the months-long ordeal of discovering a terrorist suspect missed his father, of inventing a small, compact bomb, hiding it in a phone and making sure it was the handset he ended up using. The first time he calls, the bomb does not go off. But the second time, the operation is successful.

"It was very clean, elegant… tidy," he comments.

Documentaries rely on the charisma of their subjects and the relevance of their subject matter, but The Gatekeepers is a step above most similar efforts. It is a seminal work on the occupation and one of the most damning assessments of what being an occupying force does to a country.

Each man is intensely charismatic. Under intense questioning about the morality of their actions, their pensive stares and twitches of muscle are as dramatic as any explosive Hollywood special effect.

Avraham Shalom, who resigned from the spy organisation in 1986 after being accused of ordering the murder of two terrorists following the bus 300 attack, is particularly engrossing to watch. Everything about him is interesting, from his red braces to his arm movements, his turns of phrase and his thought process. He is impenetrable, mercurial and frustrating.

These are hard, hard men. These are men who deal in moral mathematics of a sort which would ruin most right-minded people. To see the world through their eyes, especially as a typical western liberal, is to be fundamentally challenged. When they justify torture, they are not doing so in the simplistic language of right-wing Republican senators. They do so in modest, realistic calculations. We often dismiss the ticking bomb argument as nonsense, but it seems infinitely more convincing here. One subject says the use of torture increases the number of prevented attacks from 70% to 90%. It's the kind of number you can believe in. It did not change my mind, but it was much more thought-provoking than the usual grubby right-wing nonsense.

Descriptions of the challenges facing the security forces are fascinating, particularly when they originate from the right. The lenient political treatment of far-right Israeli terrorism is damned by the film's subjects. Its sudden emergence is held up as proof of how unpredictable the security situation became, how unforeseeable elements bubble to the surface, cause extraordinary damage and are then encouraged by a lax media and judicial reaction. At least one Shin Bet boss believes the rabbis to be a greater threat than the Palestinians. "The rabbis have no reason to learn any lessons," he observes.

It is the impeccable credentials of these defenders of Israel which makes their views on the occupation so convincing. To a man, they insist that the solution to the problem is political, not military. They demand negotiations. "I would negotiate with anyone," one of them says, "Even Ahmadinejad." Another describes the failure of the Camp David negotiations perfectly: "We wanted security and got more terror. They wanted a state and got more settlements."

Some are more hawkish than others, but each of them have clear scars on their conscience and clearly resent the insane, self-defeating hawkishness of Israel's political class.

One describes seeing the countless young Palestinian men dragged away from their families in dawn raids and comments: "Those moments become deeply etched inside you and when you retire you become a bit of a leftie."

What's remarkable about these admissions is not that the filmmakers were able to secure them, but that these men look so desperate to offer them.

The film suffers from the usual slanted priorities of American or Israeli projects focusing on the conflict, in that its concerns are primarily about the impact on Jews, rather than Muslims. Here, the irritation is greatly lessened by the fact that its focus is not on the morality of the conflict, but its impact on Israeli consciousness. Under this assessment, occupation has created a severe psychological scar. It has limited free thought and turned the Israelis into the oppressors they suffered under for so long.

These are the typical points made by pro-Palestinian sympathisers on a daily basis. What makes them so notable here is that they come from people who should be least likely to air them. This is the occupation from the frontline, showing the trauma on the Israeli psyche close-up.

If you consider yourself pro-Israeli, there is no point writing this off as propaganda from the other side. It is not from the other side. Anyone who feels loyalty to Israel owes it to themselves to see what these men believe is what is happening to their country. They have earned the right to speak and have their own side listen.

For those, like myself, who overwhelmingly sympathise with Palestinians, the effect of the film is deeply challenging. Yes, it vindicates, more than any other journalistic work one can imagine, our suspicions about the effect of occupation. But it also reveals a far more nuanced, subtle national character than the bullying superpower we usually envision. This is a portrait of Israel labouring under moral harm imposed from without and within. I emerged with a much more sympathetic view of the country than I had going in. Simply put: I will never view Israel in such simple terms again.

The Gatekeepers is political documentary filmmaking at its best. One could give it many praises, for the paucity of its approach, for the impressive collection of interviewees it secures and for the dogged determination with which it pursues its thesis. But it deserves much more vital praise than that – it deserves the highest praise of any film of its type: It is important.

The Gatekeepers is released today at selected cinemas across the UK