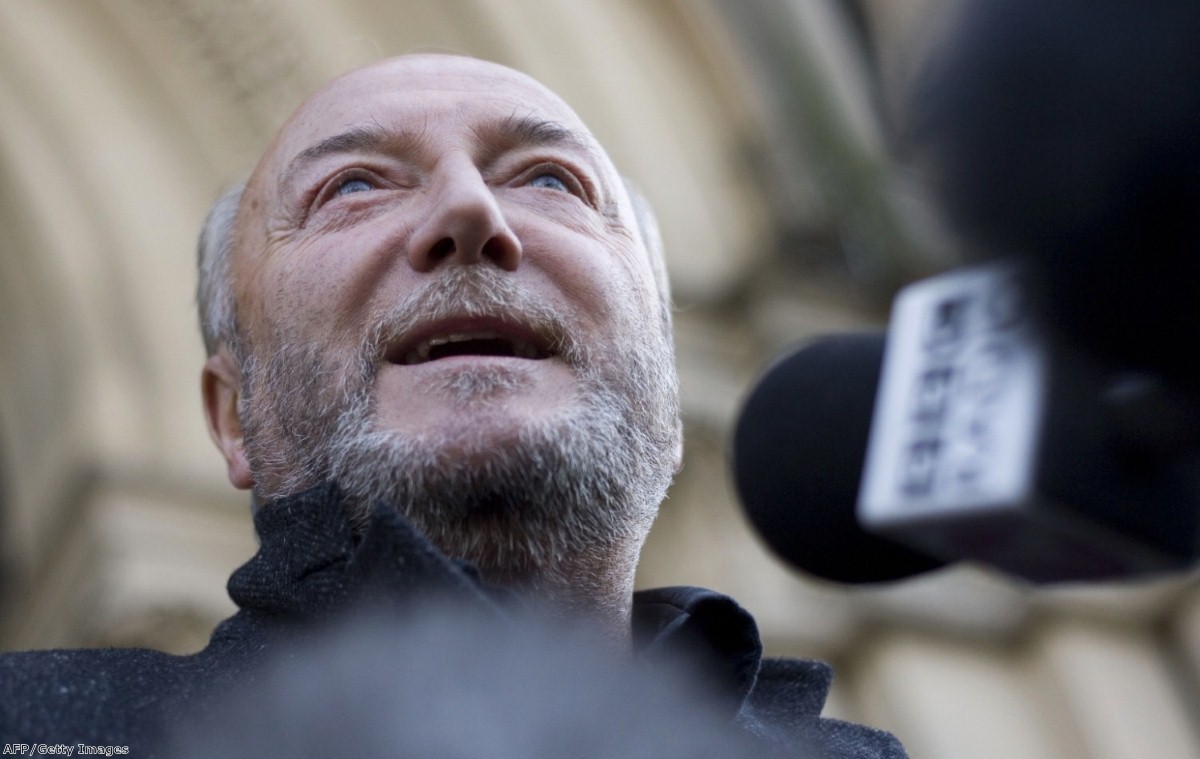 Gaffes are tricky to define. The classic trip-up is an error of the tongue (Jeremy C***), a consequence of a temporary absent-mindedness. But motivations are never entirely clear in politics, so we think the best way of sizing up whether a misguided comment is really a gaffe is to ask: did the person uttering these pearls of calamity really mean them to cause a massive stink? On that basis, here's our top ten gaffes of 2012…

With the nation facing the spectre of a fuel strike back in March, Cabinet Office minister Francis Maude took to the airwaves to calm the nation. Yes, the situation was a bit wobbly, he said, and there might be a few fuel shortages here and there. So "a bit of petrol in a jerry can in the garage is a sensible precaution to take", he suggested. Maude didn't actually have the foggiest how much petrol you can cram into a jerry can; if every motorist were to have followed his not-so-sage advice, petrol stations would have been running dry and real panic-buying would have set in. Transport minister Mike Penning later explained his colleague just "didn't understand" and had apologised – in private, we presumed.

The prime minister wouldn't have got where he is to do without having a fairly intelligent head on his shoulders, but even David Cameron is vulnerable to the occasional embarrassing failure. His only entry in this year's top ten doesn't relate to his day job, however, but to his effectiveness as a parent. This is an important component of the image he likes to project, of course, so it was more than a little regrettable when it emerged he had 'abandoned' his eight-year-old daughter in a country pub. After leaving the Plough Inn near Chequers in separate cars, both he and his wife Samantha assumed Nancy Cameron was with the other. "The prime minister went down straight away to get her," a No 10 spokesman said. Spare a thought for the pub 'source', who told the Sun newspaper: "It's not like you can look up David Cameron in the phonebook and then ring to say you've left your daughter behind."

There were always questions hanging over young 'un Chloe Smith. She had been catapulted into the Treasury following a misunderstanding, as David Cameron thought she had experience of the City; that inexperience appeared to tell in what must go down as the most cringeworthy, agonising political TV interview of 2012. Her failure to answer basic questions about fuel duty when up against Jeremy Paxman on Newsnight was such a train wreck it kept trending on Twitter well into the following day. Unusually, many felt real sympathy for the minister in trouble. Smith came up against Paxman in uncompromising mood – and the policy she was defending was, after all, George Osborne's. Still, her card was marked – and she was quickly reshuffled into the dead end of the coalition's constitutional reforms in the autumn.

Chloe Smith and the art of the political interview

The heat of the second (and, we presume, final) instalment of Boris v Ken for the London mayoralty got a bit too much for the incumbent midway through the campaign. Ken's whining accusations about Boris' income tax proved so grating during an on-air clash at LBC that the mayor just couldn't help but vent his feelings afterwards. As Ken, Boris and radio staff journeyed in a lift, Boris decided to let off some steam. One version quoted him as saying: "You're a f***ing liar, you're a f***ing liar, you're a f***ing liar." You get the idea. Boris, who likes to present himself as a considered, intellectual sort of chap, had unwittingly revealed a coarser side of his character. It didn't stop him winning the election, though – and might even have helped.

Us ordinary people tend to get hit with a penalty fare when we sneakily sit in first-class. Not George Osborne, who seemed to see himself as entitled to a bit of peace and quiet despite not having paid for the pleasure. Thanks to an on-hand journalist, the clash between his aides and the implacable ticket inspector was preserved for posterity. Osborne eventually coughed up £160 to stay where he was, but only after a protracted battle of wills. Which he lost. And, in the process, revealed a little bit about his sense of entitlement.

Too good for second-class Osborne in first-class train row

He blamed it on his stammer amid the bearpit atmosphere of the Commons chamber, but the shadow chancellor's under-par response to the autumn statement was really of his own making. Ed Balls got completely mixed up in his initial assessment of George Osborne's latest update on the economy. His performances at these big set-piece events matter, because they are rare opportunities for politicians to get direct cut-through to ordinary voters on economic issues. Sadly for Labour, the headlines Balls faced were about his speech impediment and not the deficit. When a veteran like Balls complains about his adversary using a "sleight of hand" approach, you know the excuses are being rolled out. Balls deserves some sympathy and is a confident enough man to ride out the storm, but he is a big enough beast to know errors as egregious as this are letting his party down.

2012 started off with what turned out to be one of the biggest gaffes of the year. Shadow minister Diana Abbott obviously didn't have her politically correct brain on as she composed a tweet following the sentencing of Gary Dobson and David Norris, the murderers of Stephen Lawrence. "White people love playing 'divide and rule'," Abbott observed. This did not go down well. She was forced to apologise for her "generalisations about white people", but only after her initial attempts to shrug it off as having been taken "out of context" just made the gaffe worse. "Crass and stupid," Nick Clegg commented. This was not Abbott's finest hour.

Until earlier this month, the former chief whip's foul-mouthed tirade against police officers guarding the Downing Street gate was destined to be the number one gaffe of the year. He was supposed to have called the police "plebs" and told them: "I thought you guys were supposed to be f***ing helping us." These comments made up the only gaffe which had any tangible impact, after all: a Cabinet minister lost his job, no less. Now, though, everything has changed. Doubt has been cast on key evidence in the case, meaning there's a real possibility Mitchell might be exonerated – or, at least, have much of the stigma of the event removed. This is the first time we've been doing these lists that the same incident has featured in both our top ten list of gaffes AND scandals.

Andrew Mitchell resigns in new blow to the Tories

02 – George Galloway: The gaffe that destroyed a party

Gorgeous George, back in parliament after a surprising by-election win in Bradford West, did not take long before one of his remarks caused serious damage to his political party. Respect's Salma Yaqoob stepped down after Galloway's controversial comments on rape. He was talking about the allegations against Wikileaks founder Julian Assange, which he claimed did not constitute rape "as most people understand it". No, Assange was merely being accused of "bad sexual etiquette", Galloway claimed. Yaqoob concluded these remarks were "deeply disappointing and wrong". She quit Respect, robbing it of its alliance of anti-war Muslims and far-leftists. Not what George would have had online, that's for sure.

Never had Britain been more proud of its heritage. The Olympic opening ceremony received rave reviews from almost everywhere and everyone – not just in Britain but around the world, too. So as journalists scanned social media to get a sense of public opinion, one view stuck out like a sore thumb.

"The most leftie opening ceremony I have ever seen – more than Beijing, the capital of a communist state! Welfare tribute next?" These were the comments of Conservative MP Aidan Burley, last seen resigning as a ministerial bag-carrier after he was photographed at a stag party wearing a Nazi party union. The Olympics opening ceremony, in Burley's eyes, was nothing but "leftie multi-cultural crap".

Such was the magnitude of the occasion, with the focus of the world on London 2012,that this sort of critical comment was seized on by the press. What Burley failed to realise was the storm his comments raised were not just the result of hostility to his point of view – but that this was simply not the time for a politician to be mouthing off about anything, really. Britain was uniting together, putting its differences aside; voters were not interested in the sniping comments of second-tier politicians. Burley's local Labour party even took the opportunity to raise a bit of cash to campaign against him. Twitter has its uses for MPs, but ill-judged, calamitous comments like this should not feature among them. Well done, Aidan Burley: having appeared in our 2011 scandals feature, this year you've done one better by topping our gaffes list.