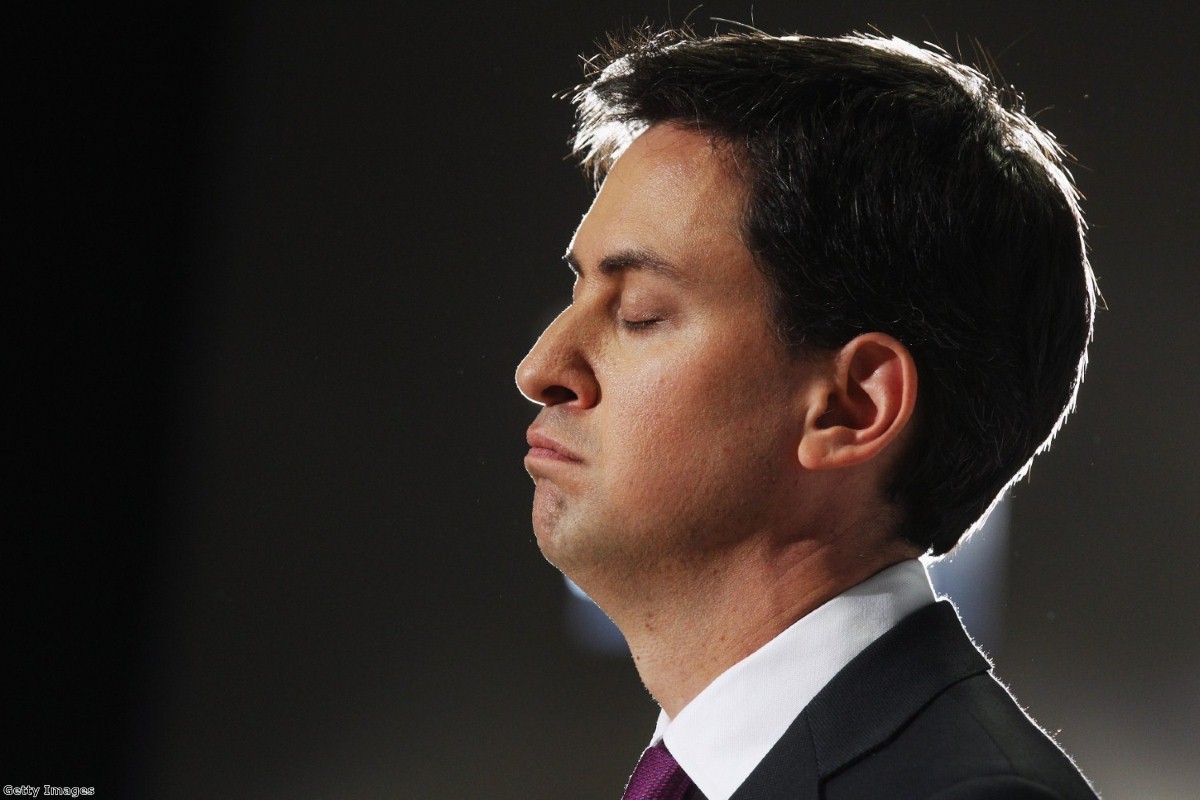 Analysis: The problem with Ed

Journalists are doing the government's job for it, so much so that David Cameron's last TV interview saw him defending Ed Miliband's performance. The range of attack dogs growling against Miliband is simply astonishing. This morning the Labour leader tried to relaunch his agenda in time for 2012. There was little there to significantly change the course of events.

He appeared on the Today programme, where John Humphrys relentlessly told him to apologise for Labour's economic record in office before insinuating he was too ugly to connect with the public. Online, political commentators were as crude as possible, attacking his tone and his language as if sizing up a blind date.

By the time journalists had gathered for his speech, they began attacking the lack of bacon sandwiches. The Labour leader was late, sparking a wave of increasingly vitriolic attacks on him. "Never seen a speech go down so badly before it's even been given," one online commentator remarked.

It all highlights the central problem facing Miliband: the press is against him and that message appears to be cementing in the public mind.

The irony is that his policies and message are popular. He communicated the public mood on phone-hacking. He was the first to demand a more responsible capitalism. His conference speech was widely ridiculed at the time, but the government now appears to have signed up to it entirely. Barely a day goes by without a Cabinet secretary, or the prime minister himself, attacking 'crony capitalism' and ethical standards in the financial sector. Finally, his 'squeezed middle' phrase, which moved the focus of Labour's attention from welfare recipients to struggling workers on low-to-medium incomes, is now accepted across the political spectrum. It even became the word of the year according to the Oxford Dictionary.

Focus groups love his policies. The problem is, they come from him. Miliband has failed to project himself as a leader and the press has seized on many of his personal difficulties and magnified them. The Sun even made a typo on one of his tweets front page news this weekend. Many newspapers signed up to Cameron's government so publicly they cannot afford for him to do well, but even if they were more sympathetic, Miliband's problematic public image is not entirely a product of the media and it would challenge anyone trying to portray him as a political saviour.

The first step in a fightback is, of course, the economy. Labour has found itself blamed for the financial crisis – a key political achievement of the coalition and one which spells doom for the opposition's ability to get its message out. Not only is the economy the main issue in British politics, but polling shows it's the area where voters consistently trust the coalition over Labour.

Will Miliband's speech today make a significant change to that equation? As Miliband himself admitted this morning, his argument that Labour values matter more during tough economic times runs against the typical historical trend. Usually, as Miliband said, "in good times people turn to left-wing parties but in bad times they say left-wing parties can't necessarily make those tough decisions".

The Labour leader tried to counter this with some concrete policy details, although they were relatively thin on the ground. You can't blame him – if government ministers have stolen his rhetoric they'd also enjoy stealing his policies. Cameron faced the same problem when he was in opposition.

There was a trio of measures to deal with the prevalence of low-skill, low-pay jobs in Britain (in truth, an international problem). Firstly, he proposed a British Investment Bank to create incentives for up-skilling the domestic workforce. Secondly, a restriction of major government contracts to firms which offer apprenticeships. Finally, a quarterly review of "short-termism" in British corporate life.

He also issued a threat to energy companies, insisting that they give pensioners over 75 the lowest available tariff or face legislation. Despite the tough rhetoric, his stance is not all that different to Chris Huhne, who has made battles with the big six energy companies a key feature of his time at the Department of Energy and Climate Change.

Finally, Miliband reiterated his view that there was a failure of ethics at the top and bottom of British society. Miliband repeated his policies on this, namely the inclusion of workers on remuneration committees and greater prominence on social housing waiting lists for those who "contribute" to their communities. The top and bottom agenda is unashamedly populist and one of those policies which will play well in focus groups but not well enough to defeat the difficulties people have with Miliband himself.

Is that anything like enough? Plainly not. The handful of policies on offer certainly won't calm jitters over his leadership style. They also don't address the key area the press wants addressed, which is how Miliband would reduce the deficit.

His attempt to hurdle over this point, by saying that Labour values should dominate the approach to spending cuts, edges Labour closer to the coalition position, but it retains the key Balls-led Keynesian differential.

That leaves us in very much the same political position we were in before the speech. On a personal level, his performance will not change anyone's opinion of Ed Miliband. He is not about to suddenly turn into charisma juggernaut. Policy wise, the change is insignificant. At most one could describe it as a change of tone, but even on that level is was a minor event.

The forces ranged against Miliband are daunting. He is also judged by a standard which any opposition leader would have struggled to live up to. But if this was a relaunch, it was a somewhat underwhelming one.