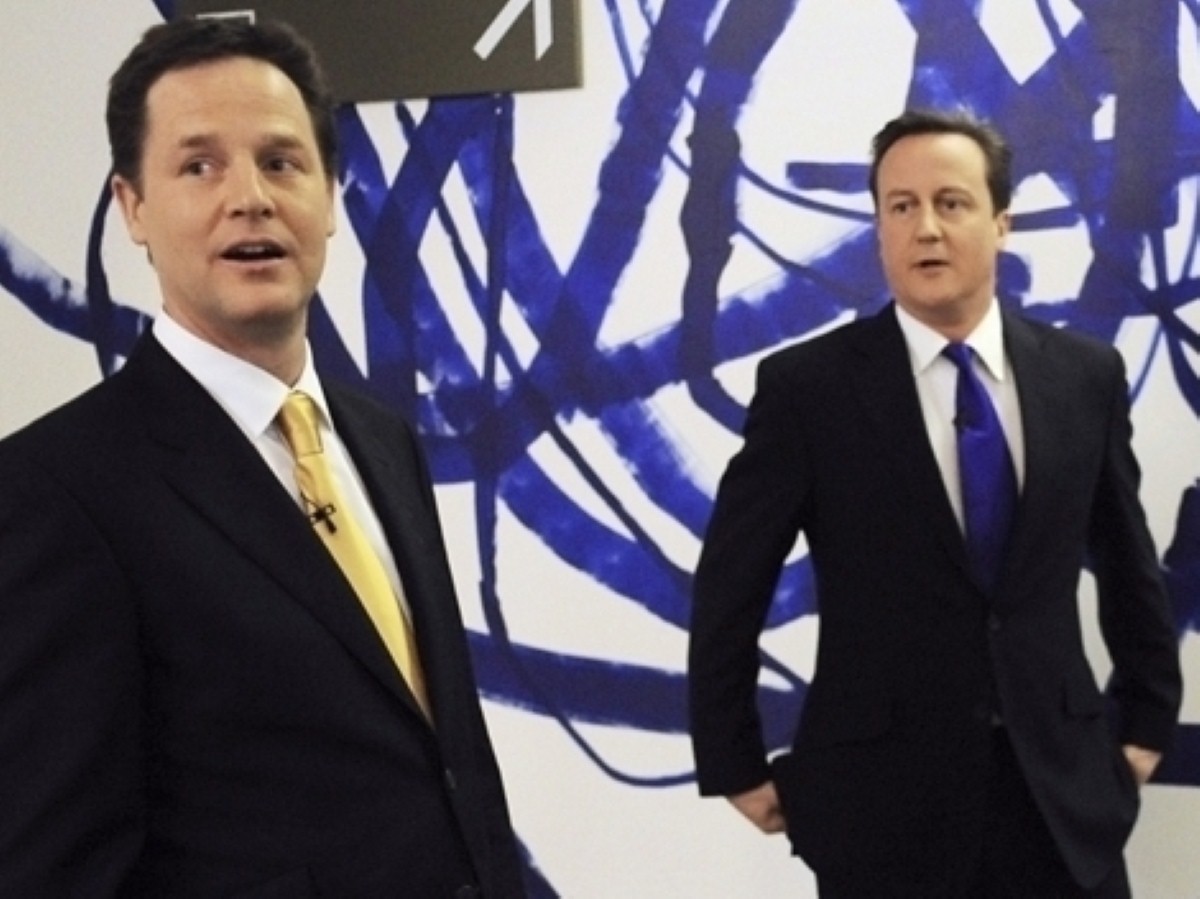 In the second part of a special week-long assessment of the general election, politics.co.uk looks at what the campaign taught us about the British constitution.

Come back later in the week to see what the election taught us about the public, political parties and the pollsters.

Britain has just completed one of its biggest transitions of government in decades, emerging from the turmoil of a hung parliament relatively unscathed.

Things would be very different under a minority administration permanently dogged by uncertainty. A quick glance at the disappointed faces around the journalists of the Palace of Westminster, who had been anticipating months – if not years – of a teetering unstable government generating fantastic news stories – is illustration enough.

Yet that is the reality that Britain would have faced if agreement on a formal coalition government had not been reached. That was only possible under the 55% proposal first tabled by the Liberal Democrats’ former justice spokesman David Howarth.

His idea was a straightforward one, designed to tackle the biggest sticking-point for the Lib Dems in a coalition tie-up.

For centuries it has been the prime minister’s prerogative to call a general election whenever he or she likes. ‘Going to the country’ when your party is ahead in the polls is a strong card in any PM’s hand.

This is precisely why Nick Clegg and co were so determined to avoid being dumped at a distinctly inopportune moment for them. Making a five-year fixed-term parliament work was key, but could only be completed if neither the Conservatives nor all the other parties together were capable of voting through a dissolution.

A 55% threshold gives that assurance to the Lib Dems, even as it attracts criticism from those pointing to the possibility of a vote of no confidence. This only requires an absolute majority and so presents a challenge to the 55% threshold: what happens if a government is voted down but a general election cannot be called? Clearly, the outcome would be unclear.

But it would be wrong to leap to the conclusion this is unconstitutional. If a no confidence motion succeeded in the Commons, David Cameron would be forced to resign – or form a new coalition securing an alternative majority. The pressure would pass to the Lib Dems to support the opposition party in a new government. If they refused, the pressure to approve a coalition would be intense.

The conventions would stand. If no party could be supported the Commons would quickly move to back a dissolution.

This is almost, but not quite, guaranteed. That element of risk is a price worth paying for having a coalition government. Without the 55% lock-in the Lib Dems would probably have walked away from the formal deal they now find themselves in. It is the flexibility of the constitution which made that possible – the simply requirement for a majority in the Commons on the legislation which will enshrine 55% in law.

What has been so encouraging in recent days is this demonstration of how easy it is to bend the rules to make the coalition work. It turns out the British way of doing things is strikingly easy for the Lib Dems and Tories to put on a united face. Even something as apparently trivial as the conventions of job titles has helped the two parties in government nestle closer together.

Close observers of the job titles distributed in the formation of last week’s Cabinet list will have noticed one particularly interesting retention. In amongst the more archaic titles – lord president of the council (Clegg) and the first secretary of the Treasury (Cameron) – we find William Hague has kept Peter Mandelson’s old job title – first secretary of state.

This was used by the Lord Mandelson to signify his status as primus inter pares under Gordon Brown’s premiership. In the very different context of a coalition government, how does the job stand up when compared with Nick Clegg’s post as deputy prime minister?

Efforts to establish the precise relationship between these two posts met with limited success. The Cabinet Office appeared uncertain, with one spokesperson tentatively explaining that the deputy PM post has in the past “constitutionally meant a lot of different things”. When John Prescott was deputy prime minister he held the first secretary of state role, too.

Then came the experts. The first secretary of state role, as Emeritus Professor Rodney Barker of City University puts it, does not appear to carry much weight after all.

“It’s an extra boy scout badge, isn’t it?” he says. “It doesn’t really mean anything – it confers a degree of status but I think no particular power goes with the job.”

One government spokesperson resorts to reading the Wikipedia entry down the phone. It is, she discovers, an “occasionally used” title which is “principally regarded as purely honorific”. It has a greater constitutional grounding than the DPM role, as it clearly elevates the holder above all other secretaries of state.

Prof Barker disagrees with that, however, despite the clear dominance of the Labour administration by the ex-business secretary.

“The only thing that implied that was Mandelson’s own behaviour,” he muses. “He would have behaved like that in any position.”

It was only after some perseverance that the truth emerged from the government. Essentially, unlike in America when the president dies or resigns, there is no ordered list of precedence. “It’s for the government to set it – it’s not that constitutionally the jobs come in a particular order,” a spokesperson says.

It is up to the politicians to designate responsibility. They are free to do this as they like. Simply by declaring that he and Clegg will be leading the coalition together is enough to send the signal.

“Were the prime minister not around it’s clear who will be standing in – Nick Clegg, not William Hague,” as Prof Barker puts it. Cameron made that clear in last Wednesday’s joint press conference in the Rose Garden of No 10.

The move’s purpose, then, is to give Hague a clear superiority over other members of his own party within the Cabinet. The job title morphs to fit the role required of it by politicians, rather than the other way round. Again, the flexibility of the system has aided the formation of coalition government.

The shackles of government

Maintaining the coalition might be a different story. There is a sense the Lib Dems have not yet grasped the full extent of what one of the constitution’s biggest conventions, collective responsibility, entails. As the years go by the price of power will become more and more apparent. Splits will inevitably emerge. Can the coalition cope?

There will be nowhere to hide, as the predictions of the Hansard Society’s Ruth Fox show. Speaking before the final coalition agreement was reached, she speculated that a coalition deal would mean big changes to the way the Commons works.

“It’s only in a coalition that the dynamics of the Commons change,” she says. Lib Dem backbenchers will be called in the government’s allocation of time. The same applies for their seats on select committees and public bill committees. Under a minority government, committees, formed to reflect the overall balance of the Commons, would have made votes on each clause of vital importance. The government could be far less certain of getting its legislation through. Now even in committees there will be voting in blocks. “You’d expect agreement around who is going to be called for public evidence sessions, for clauses, for all aspects of business,” Dr Fox says.

There will be tensions in the Lords too, which paradoxically mean parliament will lose out as a result of the coalition government. Previously the upper chamber was in a state of no overall control, with the Lib Dems typically holding the balance of power. That all changes in a coalition. “The irony is you’re going to end up with a less influential House of Lords because there isn’t going to be that scope for bartering over clauses and bills,” she explains. “It’ll be a much more solid arrangement in favour of the executive.”

But will peers, who are by nature more independently-minded than their whipped colleagues in the Commons, be prepared to compromise as much as MPs for the sake of power? As the tensions mount the Lords could find itself being viewed as a barometer of feelings within the government.

Here the constitutional rules are very straightforward: being in the government comes at a heavy price. The convention that all ministers must stick to the government line – or resign if they cannot – is as welcome, in its own way, as its flexibility in helping the coalition partners come together in the first place.

As George Osborne would put it, they really are in this together. The constitution, so welcomingly flexible in helping create a stable coalition government out of the uncertainty of a hung parliament, will not be so kind in the months and years to come.