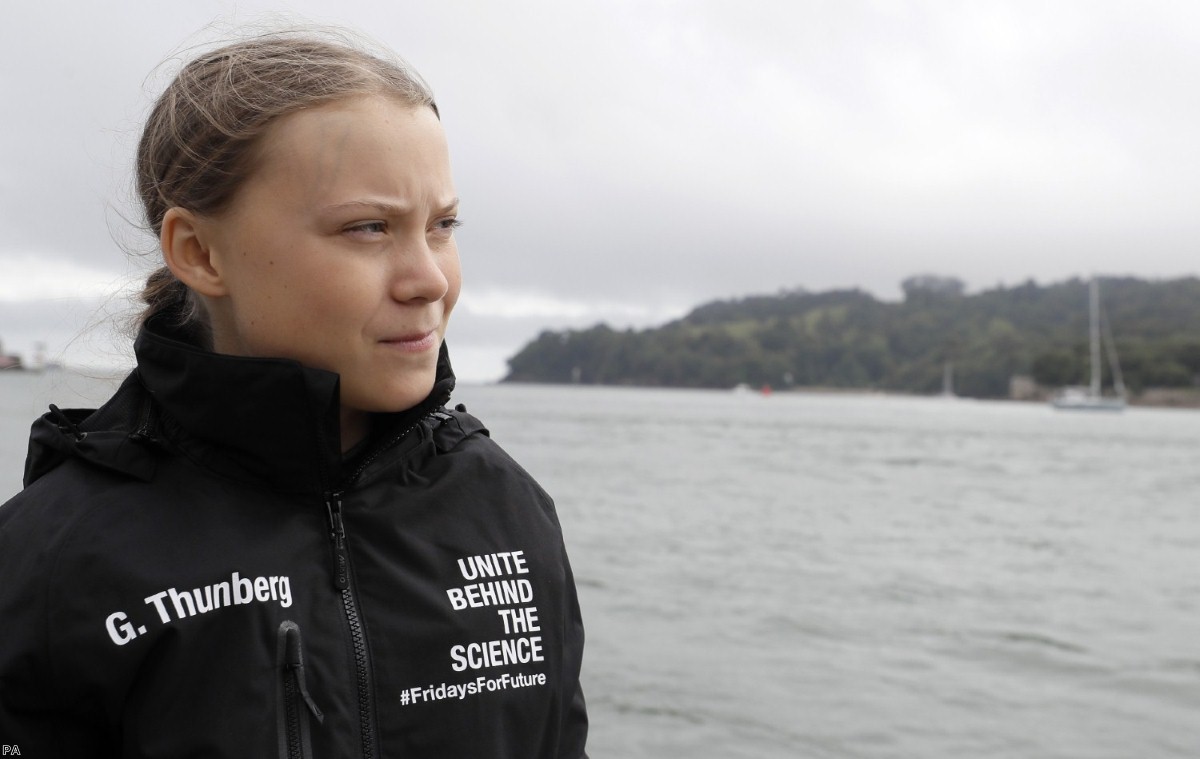 Week in Review: Greta refuses to know her place

Greta Thunberg combines three things which drives all the worst people crazy. She is young, female and won't take things lying down.

This week, the young environmental campaigner set sail across the Atlantic on a solar-powered yacht. It triggered the now-standard bout of right-wing vitriol.

Brexit funder Aaron Banks responded by saying he hoped – in that joking-not-joking way which the hard-right uses to progress its agenda while establishing a defensive zone when attacked – that the 16-year-old capsized in the middle of the ocean. "Freak yachting accidents do happen in August," he tweeted.

Earlier this month, Australian News Corp columnist Andrew Bolt labelled her "strange" and "disturbed". Ukip's zombified leader in Wales, Neil Hamilton, also tweeted about the campaigner recently, sharing images of her with demon eyes and the phrase: "Have you done anything this week which Greta might disapprove of?"

It's shaping up to be the hottest day of the year – please remember:

On a very fundamental level, Thunberg breaks the mould for how we expect people to behave. Young people are not considered valid sources of serious political attention. Certainly they are not supposed to have political leaders beat a path to their door.

And indeed, there's something quite noticeably odd about the social atmosphere between her and politicians.

They know that she is currently acting as figurehead for something greater, for a youth movement which can mobilise wide numbers and command passionate and widespread support. This means that the traditional power dynamic of these kinds of events is inverted.

Usually when you see politicians and young people interact, it is because they have come to their school and the pupils have to sit there and look interested while the politicians acts out their supposed interest in education. But when you see them with Thunberg, they are coming to pay their respects to the 16-year-old girl. She's basically the godfather. To the right kind of person, that's intensely satisfying. To the wrong kind of person, it's an unholy Bizarro world of horror.

People love to instinctively dismiss youth. You can see the evidence – sometimes benign, sometimes dreadful – countless times a day. People's working assumption is always that things were better when they were young – there was more community, people spent less time on screens, neighbours knew each other's names, on and on it goes. It's all nonsense. Once you get to a certain age, you start to see the exact same narratives they applied to your generation now applied to the next.

People in their late thirties now worry about the video game Fortnite despite having heard and ignored the same worries about their Nintendos when they were young. They worry about teenage vaping, online dating, or social media use. The technology changes, but the basic patterns of instinctive distrust of the new is present throughout.

But in reality the young bring a specific quality to politics: the vision of the outsider. They arrive without any of the baggage the rest of us have built up over the years, the sullen truce you come to when political tribes have faced off for years.

Older people, as concerned as they might be by the environment, have tended to consciously or tacitly acknowledge the strength of industrial and political opposition, along with the difficulty in international cooperation the issue entails.

Thunberg's generation bring nothing but a profound sense of anger and frustration that such an obviously well-documented problem, one which will affect them more than it does their parents, is being ignored. It is the simplistic assessment of the outsider and it is better for that by virtue of containing moral truth.

The most impressive thing about Thurnberg is that doesn't seem as if she is even struggling. There is a sense of calm entitlement to her, as if she expects to be taken seriously and treated with the gravity which her message entails. It's not just that she is young and female. It's that she does not seem in the least concerned by that. She acts like she's waiting for the world to catch up.

That extends to her outspoken discussion about her diagnosis with Asperger's Syndrome. She mentions this quite frequently and that in itself is refreshing. It is not something she is trying to get past. It is a part of who she is.

This treatment of a condition is one of the most encouraging aspects in the cultural life of young people. It takes the things which were once treated as obstacles people could get over and starts to reformulate them as part of their identity. It reflects a more open culture, in which people actively discuss, rather than privately struggle with, the things which affect them.

Thurnberg's crime is to be young, female and unafraid. She does not know her place. And quite apart from anything else she might achieve, this makes her a profoundly healthy contribution to political life.