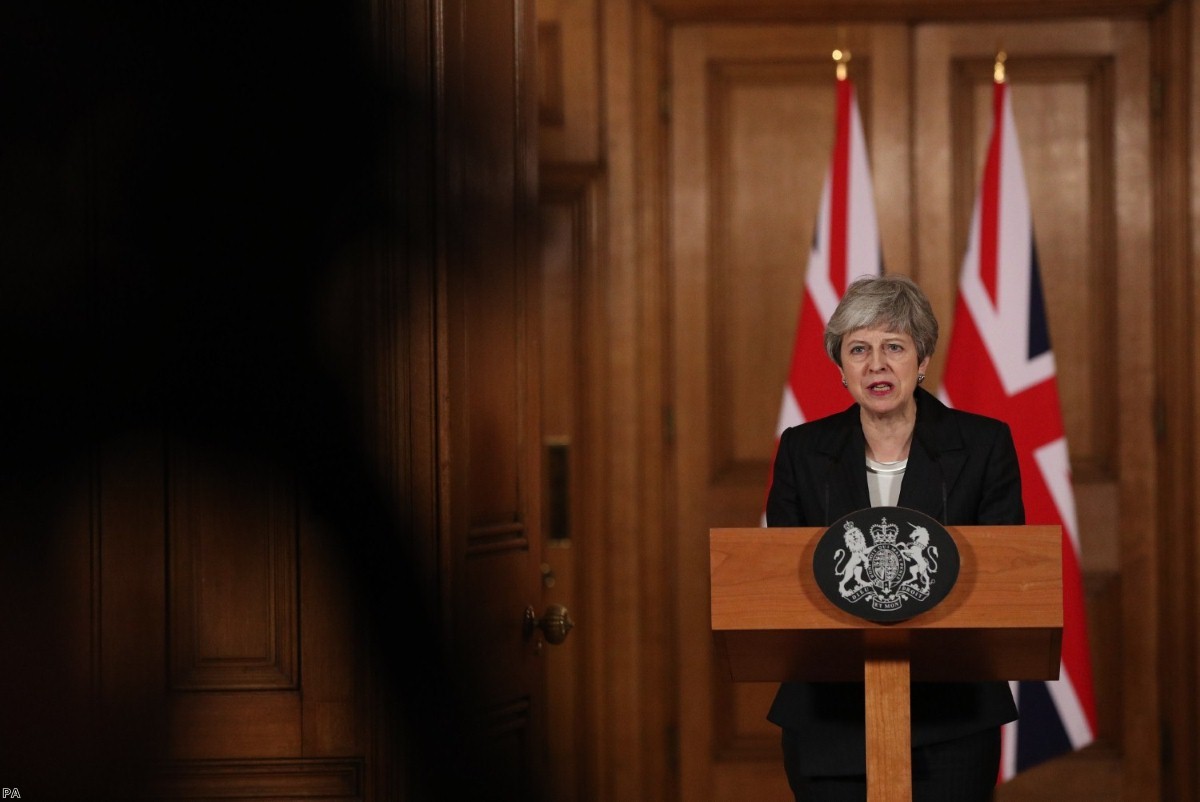 We're not in the room when they decide what happens to us. First Theresa May will make a short speech. Then she leaves and the leaders of 27 other countries make a decision. We wait outside. That's how Britain finds out what happens to it. It's taken just three years – three years of nationalism and political puritanism – to reduce the country to this status.

May's previous speeches have often managed to turn otherwise sympathetic European leaders against her. They don't appear to be any better behind closed doors than they are in front of cameras. In both instances they lack charisma, or intellectual content, or even a hint of personal responsibility. She cannot think creatively about problems. She cannot lay out a convincing case for how to proceed with them. All she can do is blame other people – the EU, opposition parties, the House of Lords, or the institution of parliament itself – for her own failings. Expecting her to live up to the historical moment is like asking an old Casio calculator to log on to the internet.

As it happens, the EU leaders will probably reject the offer of a June extension and fix it to the month of May. It doesn't matter. The prime minister is unlikely to get her Brexit deal through next week, so it's largely academic. The crucial moment will come next week, if it is defeated, as we find out whether they will meet again and provide a longer extension. We expect the answer to be yes, but we are no longer in control of our fate. Other countries decide it for us.

This is the core fact of today: our fate in the hands of others. It is very real and genuinely profound. When else were we brought so low? Which other moment in our modern lifetime ever saw us so humiliated? Suez? That was nothing. A bad-tempered chat with the Americans which made it clear we couldn't run the world anymore. Denis Healey asking the IMF for an emergency loan? Black Wednesday? These were drops in the ocean next to what is happening to us here. We are living through history – and not the good kind. We're living the kind that even in 20 or 30 years' time, people will say: 'Well this is bad, but it's not as bad as Brexit.'

The causes of today's events are many and varied. The government wasted time it did not have. MPs were unable to accept the practical consequences of a theoretical course of action they were intent on pursuing. There was insufficient preparation. There was a preference for echo chamber reassurance instead of cold, hard calculation. We fiddled and bickered as the fire took hold.

Brexit involves leaving a membership-based regulatory super-power, with huge trading strength, which functions according to the strict and unyielding implementation of law. You are always going to have less control outside than you do in. If Brexit happens, that'll be the case for all sorts of decisions, from the coding on driverless cars to best practice in medical trials. We'll do the same as they do, just to keep life ticking away as easily as possible. The only thing that will have changed is that we won't be in the room making the decisions anymore. Today is just a particularly dramatic, system-wide application of the basic principle which is set to govern our future as a nation: self-imposed exile from power.

But even if you did decide to pursue this project, there are good ways to do it and bad ways. The good way is to come up with a set of deliverable goals and a realistic timetable. The government did not do that. The goals it set were largely impossible – such as maintaining the exact same benefits as single market membership while leaving it – and the timetable was established on the basis of domestic political concerns rather than a disinterested assessment of what was required. This is what happens when you fixate on pleasuring the most hysterical and right-wing elements of your party instead of thinking about the good of your country.

Cooler heads warned about this moment for years: when the result came in, when Article 50 was triggered, when the government refused to be honest about the obstacles in front of it, when May wasted time on a pointless election or ran down the clock in the last few weeks. This is precisely the moment they feared: A proud country, reduced to begging. Brexit is an outrage to the status of Britain. It is an act of national mutilation.

But it is also a reminder, in these final pivotal moments of the Article 50 process, of what's at stake. The power, reputation and pride of the country is on the line. The primary argument against Brexit has always been a patriotic one. And today shows why that is. You can run from that truth. You can hide from it. But there's no place left anymore. It is plain for all to see. The bleak, drab, pitiless reality of what this project entails is now visible to the world. It can still be stopped, and it must be.