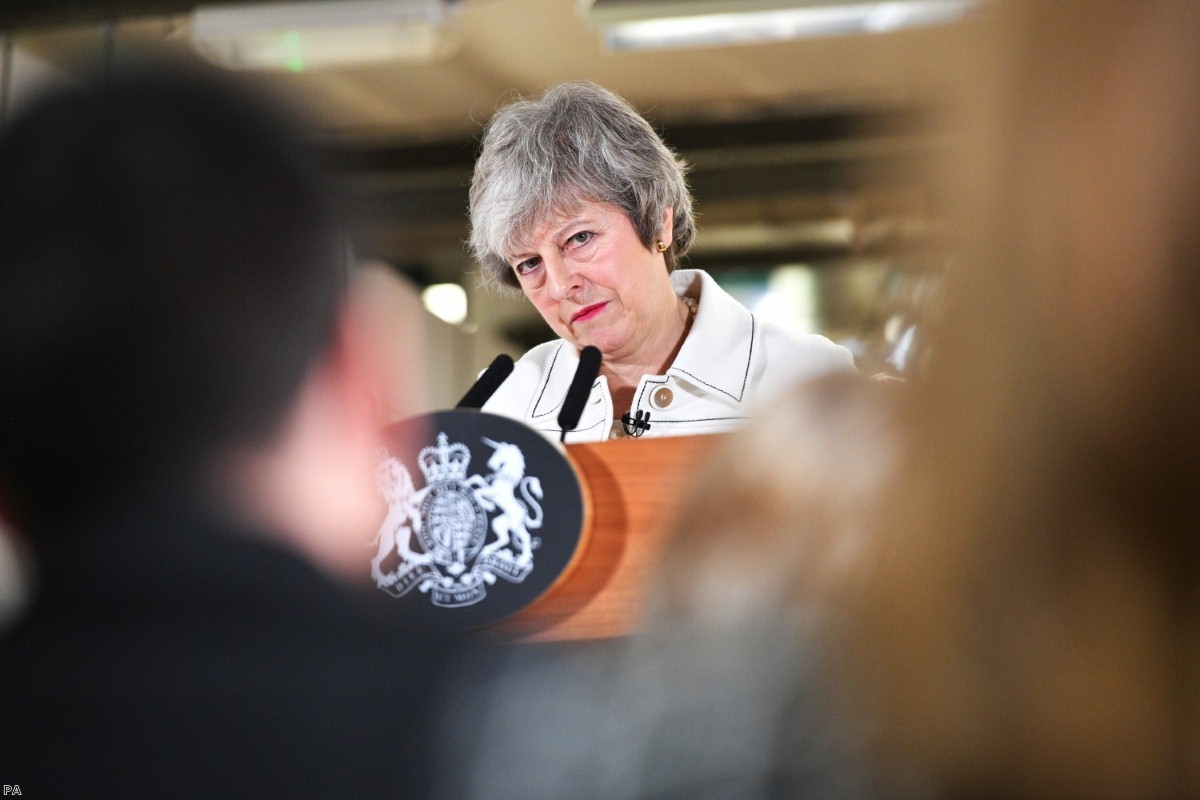 Conspiracy theory & lies: This is all May has to offer

Her consensus period didn't last very long. When Theresa May first brought her deal to the Commons she tried to present herself as the sensible voice in the centre, a moderate and pragmatic prime minister holding the line against unreconciled europhiles on one side and irresponsible no-deal types on the other. That facade has now crumbled.

Her last ditch attempt to get MPs to support her deal this morning is to go to Stoke-on-Trent, the area with the highest Leave vote in 2016, and warn that Remainers are trying to undermine the will of the people and only her deal can stop them. Par for the course for this relentlessly divisive and tribal prime minister.

Over at Radio 4, Liam Fox reiterated the message. The only thing worse than his opinions was the fact that he clearly had dry lips and was holding them close to the microphone, so you could hear the horrible sticky sounds they made when he talked. It was like being snogged by a dead fish.

Together, May and Fox completed the three-stage tactic of the right-wing populist: Conspiracy theory, followed by authoritarianism, followed by outright lies.

The only reason May was struggling to get her deal through, Fox insisted, was because parliament was "dominated by politicians who wish to remain in the European Union". This is obviously nonsense. Parliament hasn't had a Remain majority since the referendum and has proved mostly spineless in holding the government to account. The ERG group of hardline Brexiters oppose May's deal. Nick Boles, who was branded a 'conspirator' in yesterday's papers for thinking of ways to avoid no-deal, is actually going to vote for May's deal. The idea you could call these guys Remainers is absurd.

But this kind of paranoid populist gibberish is key to the populist worldview. They cannot accommodate the idea that their tribe might be wrong or misguided, so some sort of conspiracy must be invented to explain why reality will not conform to their prejudices.

Then came the lies. "Parliament contracted out its sovereignty on the issue of whether to stay in the EU or not to the people of this country," Fox insisted. Notice how utterly disingenuous this is. Fox is not, no matter what he says, suggesting the British people get a say in negotiating the Brexit deal. He is fiercely opposed to even offering them a say on whether they accept it or not. It's not the people he wants sovereignty contracted out to – it's government.

His view is essentially that parliament should have no role scrutinising or voting on what the government does in relation to the main policy issue the country faces. This is the standard talk of the authoritarian. Fox is a perfect pound-shop tyrant.

And then came the third stage of the populist agenda: the outright lies. "On the rare occasions when parliament puts a question to the British people directly we have always understood that their response carries a profound significance," the advance section of May's speech said when it was sent out to journalists. "When the people of Wales voted by a margin of 0.3%, on a turnout of just over 50%, to endorse the creation of the Welsh Assembly, that result was accepted by both sides and the popular legitimacy of that institution has never seriously been questioned."

And then she imagined some bleak and terrible alternate reality, in which MPs had refused to accept the referendum result. "Imagine if an anti-devolution House of Commons had said to the people of Scotland or Wales that despite voting in favour of a devolved legislature, parliament knew better and would overrule them. Or else force them to vote again."

Terrible stuff. Grim prospects. Except of course that this is precisely what happened, as Twitter's Joe Oliver, Stephen Bush and Steve Peers pointed out. Not only did the Conservative party refuse to accept the 1997 referendum result, they went into the 2005 election pledging to offer a second referendum – or People's Vote, rather – on whether to reverse it.

These are the three standard tactics – conspiracy, authoritarianism and lies. May has used conspiracy theories throughout. She used them when she fixated constantly on an enemy within undermining the referendum result, when she called a snap election because parliament was supposedly trying to stop Brexit, and when she then said EU leaders were interfering in the election. She has been relentlessly authoritarian, working constantly to undermine parliament by denying it votes, gorging herself on statutory instruments, dismissing opposition day motions, and ignoring its instructions. And she has lied throughout. She lied about the nature of a transition period, about the ability to have an open border in Ireland while simultaneously controlling all our own laws, about the ability to get a trade deal done in two years, about whether she'd hold an election, and about whether she would delay the vote on her deal.

This is her standard operating procedure. And now here she is again, right at the bitter end, pulling the only trick she knows. It's all she has to offer.