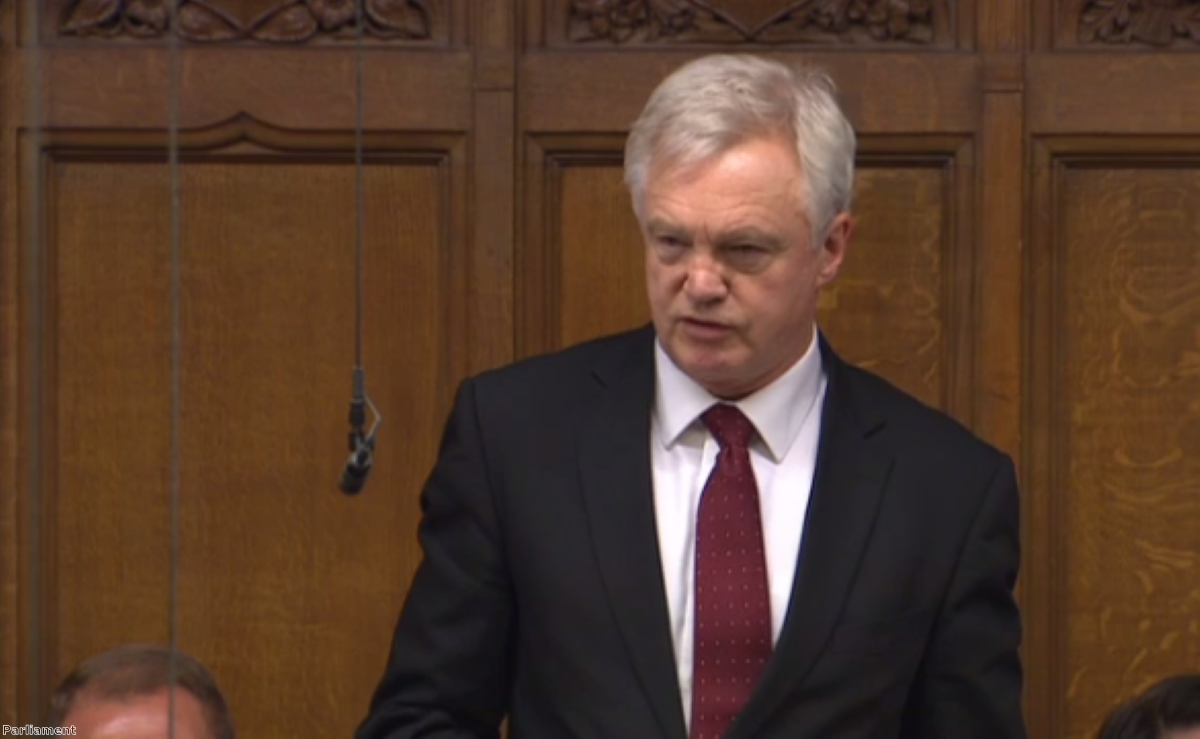 Decoding David Davis: The govt knows it is about to make us poorer

Another remarkable session with David Davis in front of a Commons committee today, this time with the newly-formed Brexit panel of MPs. The Brexit secretary went further than usual in stating the government’s aims in relation to the single market, saying that its objective was "to have as close to the level of access that we currently have as we can achieve"

What an incredible statement. It implicitly admits that the government would like to stay in the single market. After all, why else would you want the closest possible thing next to that? You might reasonably ask why we can’t therefore do so. After all, that would still see us leave the EU, thereby fulfilling the mandate of the referendum.

The answer came minutes later when David repeatedly stressed that free movement, which is a requirement of single market membership, could not be reformed. It had to be scrapped. "Take back control is quite an important issue here," he said, when asked about the potential for preferential immigration rules for EU nationals. "There has got to be clear control by this parliament."

It couldn’t be any clearer: The red line is free movement. Not the economy. Not jobs. Not trade. Free movement.

What’s fascinating about the tone of Davis’ answer is that it rules out any attempt to even try to reform free movement. We might be open to an emergency brake (Davis pretty much ruled out this possibility). We could have a seven year gap, with a top limit on numbers. Or perhaps follow Labour shadow Brexit secretary Keir Starmer’s goal of free movement on condition of a job offer. That would be hard to secure, but you could give it a shot.

Instead, Davis has clearly given up. Free movement is the red line. That is the key demand. It means we have to leave the market and just sit there and take whatever the EU chooses to give us. No wonder he expects the talks to be short. We are not going to fight. We are just going to take what we’re offered. We better hope, after all the arrogance and swagger of Brexiters’ criticism of the EU, that they are in a charitable mood.

If the Brexit secretary’s announcement of his ‘closest possible access’ goal implicitly admits that membership of the single market would be beneficial, then it is left to the Office of Budget Responsibility to explicitly state that ending free movement would not be.

Has there ever been a more irrational and self-harming policy agenda by a major Western economy? They won’t say it outright, but on the basis of their own words and documents, the government is essentially admitting that it is going to make the country poorer. It is going to make British people worse off. And it is doing so in order to satisfy a political objective which will make us even more worse off in and of itself.

And for what? For a mandate that doesn’t exist. Whatever Davis says, free movement was not on the ballot paper. Was it an important part of the campaign? Yes, but then so was that bus slogan on sending money to the EU and Davis has already signalled that he's open to that continuing. What polling we do have suggests the public are not willing to lose any money over Brexit.

Davis gave all those answers in response to Emma Reynolds, the Labour MP who in September helped cement the political consensus against free movement with a Fabians article saying that "no future deal can retain free movement of people in its present form".

Labour are as responsible for this course of action as the Conservatives are. They are like two blind men talking to each other in a burning room.

Ian Dunt is the editor of Politics.co.uk. His book – Brexit: What The Hell Happens Now? – is out this week from Canbury Press. A Just Giving campaign has been set up to send his book to every MP.