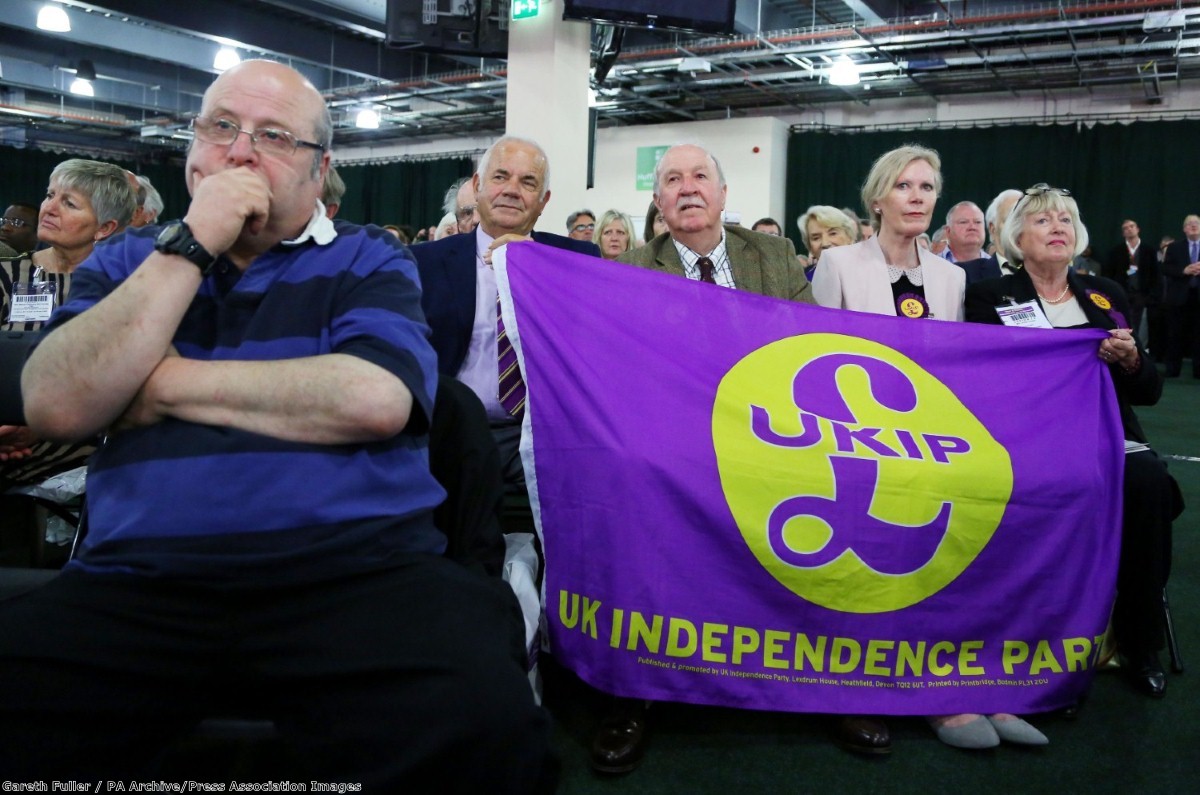 The Ukip leadership election is underway, although we still don't really know how many people are in it. Diane James might still throw her hat in the ring. And front-runner Steven Woolfe failed to get his application in on time, apparently due to IT problems at Ukip head office. There's now some protracted decision-making process by which they decide if he's still eligible. This being Ukip, the protracted decision-making process is accompanied by fierce counter-briefings.

Assuming Woolfe makes it onto the final list, he'll find himself up against some intriguing and often rather odd opposition.

Jones' most famous moment came a couple of years back during a seemingly innocuous discussion on Voice of Africa radio. In the middle of a debate with Helen Pattison of the Socialist Party, the Ukip Lambeth deputy chairman apocalyptically lost her cool (13:40 in on the clip below).

"Will you just shut up?" she suddenly screams.

There's a moment of stunned silence before Pattison whispers: "Oh God." Someone else meekly says: "This is an intellectual discussion."

This colourful personality is also on show on Jones' Twitter feed. There are, as on all Ukip Twitter accounts, attacks on BBC bias. But Jones takes it further in retweeting criticism of the BBC journalists who just interviewed her.

There are also retweets for anyone who says she's attractive.

@joneselizab You are very welcome although I still want Steven how about you as deputy? The best looking leader and deputy probably ever!

There's one short video of her launching her campaign on YouTube, in which she promises more internal democracy in the party. Most of the candidates allude to this and I'm taking it as code for score-settling with internal rivals after the election. She also uses the video to claim that Nigel Farage has an "inherent" understanding for refugees "in his own blood" because he is descended from Huguenots. She really says that.

Policy-wise, there's not much around. She mentions universal broadband in the video and says she doesn't want to "rewrite the Bible" when it comes to Ukip's 2015 manifesto.

The articles she tweets are predominantly from the Daily Express. One concerns skipping Article 50 and leaving the EU by repealing 1972 European Communities Act. This might be quicker than Article 50, but it would mean Britain's word in signing treaties could no longer be trusted. We'd be an international pariah. She is also very keen on Theresa May prioritising trade deals outside the EU before those with the EU, even though major non-EU economies have already said they need to see a resolution to the UK's European relationship before they can enter talks.

Arnott is Ukip's North East England MEP. He's a bit of an unknown quantity and reading his campaign literature doesn't really help matters. Posts on subjects like the economy, crime and education don't have any policies and are mostly filled with centre-right platitudes about the effectiveness of the free market.

He's particularly concerned that "those who torture defenceless animals to death should be jailed". There are already laws for this.

He calls for "constitutional reform that will achieve a dynamic, democratic party", although again it's unclear whether this is a concrete system or just a plan to settle scores with Ukip rivals. Where you can find policies, they're pretty vanilla. He thinks HS2 is currently "poor value for money", he wants to make "prison conditions tougher", protect girls from female genital mutilation, be tougher on rape, introduce an initial presumption of shared (50-50) parenting in custody cases and hold referendums on more "key social issues".

People often ask me why I want to be the next leader of UKIP:https://t.co/1Rjvox6oXE

But his views on Brexit negotiations are unsurprisingly more robust. He's clearly uncomfortable with Theresa May, saying that since Andrea Leadsom stepped down "the establishment is organising itself for 'business as usual'."

"We need a tough negotiator," he said in a blogpost. "We need someone who will understand some fundamental principles of negotiation. Let's talk about how I buy a car."

There follows a protracted metaphor about the sensible way to approach trade negotiations based on his experiences of buying automobiles.

"Firstly, I don't take someone with me who's going to tell me that the car is worth the asking price and I'll never get a better deal. If I'm trying to haggle down the price, having a friend there telling me not to haggle is going to cost me a lot of money.

"Ultimately if I go to buy a car, and the dealership isn't playing ball, I have to be willing to walk out of the door. As I leave, they always call me back and suddenly find that they can offer me a better deal."

What can you learn from this painful exercise in comparison? Firstly, that he does not approve of Remainers being in charge of delivering the Brexit deal. And secondly, that the UK should be prepared to drop out the single market and into WTO rules. Funnily enough, this is actually one of the more moderate Ukip approaches to Brexit. Unlike Woolfe, he hasn't pledged to leave the single market. Unlike Jones, he doesn't want to just repeal the 72 Act. Hapless metaphors aside, Arnott evidently believes in trying to reach a deal first.

Etheridge is gloriously awful. Evidence A: his campaign slogan is 'Billieve in Bill'. His crowdsourcing appeal has currently raised £8.

Our strength is our difference pic.twitter.com/XyMYueitlh

The West Midlands MEP wants to suspend all visits for the first six months of a prisoner's sentence, as well as any freedom to leave the cell. He would also charge prisoners £40,000 a year until their funds are depleted. He wants to ban all electronics in jails, although quite why is not clear. As you might have guessed, he admits to having never visited a prison.

He also wants a referendum on the return of hanging, in which he will campaign in favour, saying: "The very worst crimes deserved the ultimate penalty".

It has not always been plain sailing for Etheridge. He came a cropper when the Daily Mail reported that he encouraged Ukip candidates to emulate Hitler's speaking style in 2014.

"Look back to the most magnetic and forceful public speaker possibly in history. When Hitler gave speeches, and many of the famous ones were at rallies, at the start he walks, back and forth, looked at people – there was a silence, he waited minutes just looking out at people, fixing them with his gaze."

Later, a member of the audience asked Etheridge how to use social media for campaigning. He replied, seemingly without a hint of irony:

"If you think for even a second that what you say can be screwed, twisted and spun, do not allow that video to be posted by people."

The MEP is only in the party following a departure from the Tories during disciplinary proceedings. He'd been suspended after posing in a photo with a golliwog doll. Shortly afterwards he wrote a book titled: A Post-Political Correctness Society. In it, he argued:

"The political and social elite have cravenly surrendered to the diktat of the Politically Correct dogma that has crushed free speech, smashed enterprise and reduced Britain to a mere shadow of its former self."

Even on a list of people with very few policies, Duffy stands out by the lack of substance. She wants to start "tackling taboo subjects like integration" – seemingly unaware of the fact that immigration was the dominant theme of the referendum campaign. She wants "a positive modernised vision for British Islam", although it's not certain that her understanding of the religion would stretch far enough for her to be able to describe it.

Her Twitter feed is surprisingly apolitical, with room being devoted to her ranking on WordBrain. There are also typical tweets on the BBC's anti-Ukip propaganda and support for a petition for "European Union flags, emblems and logos be removed from all public buildings".

There's nothing else really.

If Woolfe makes it onto the final candidates list, he'll be considered the instant front runner. You can see why – from the quality of his launch video, to the extensive interviews with respected media outlets. And there are actually a few interesting things about him.

I set out in Manchester why I believe I am the best man to lead UKIP into this new era.https://t.co/xlsCSXBhCw

He sounds like a mainstream politician, not a head banger – focusing on non-EU, non-immigration issues like social mobility. He has a backstory, rising from a council estate to the Bar. He uses awful Westminster phrases no normal person would ever dream of uttering, like 'British dream'. He does the standard mainstream politician bit about left and right not existing anymore, although admittedly he does it in a particularly painful metaphor ("I no longer believe in the right/left divide anymore. It's something of the past. It's a bit like Motorola – I want to be the Samsung and Apple of the future.")

Behind all that, there is the start of a strategy. Woolfe says "staying in the single market is not an option" and plainly plans to set himself up as Real Brexit should Theresa May try to do so in a bid to limit economic damage to the UK. Woolfe is also clearly thinking about how to link industrial northern Leave voters with the shires.

But his record is patchy enough to take the shine off his mainstream credibility. Aside from the late application, there is speculation that he might have forgotten to renew his membership, making him ineligible for the leadership. He's also admitted to Huffington Post that he failed to disclose a drink-driving ban when seeking election as a police and crime commissioner – a possible breach of electoral law. For a candidate running on competency and professionalism, it’s not a good look. But given his competition, it's not necessarily one which would defeat him. Assuming his enemies in Ukip don't try to keep him off the ballot, that is.