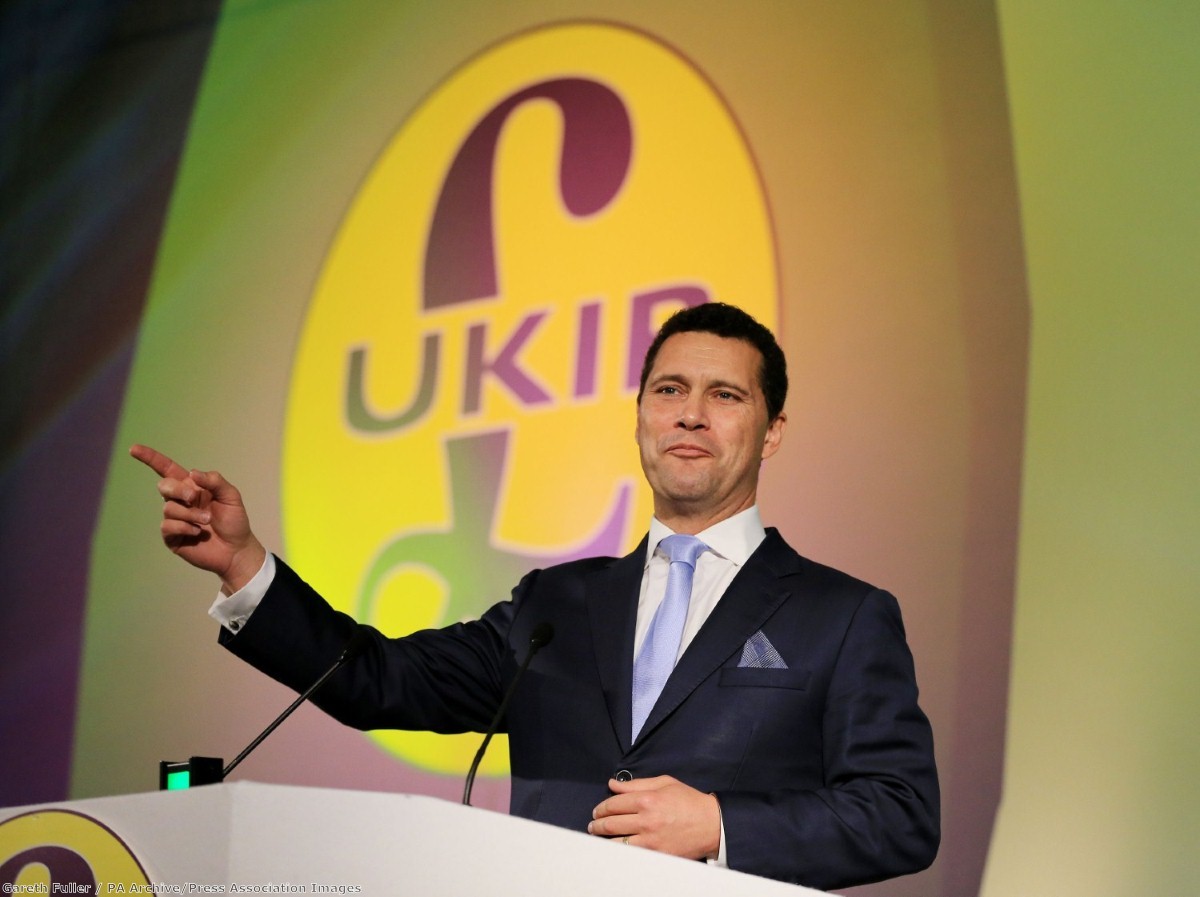 Ukip is not so much a political party as a psychological condition. It shouldn't be surprising that the behaviour of its followers mimics the inadequacies of its policies.

Steven Woolfe is a case in point. The leadership front-runner failed to get his application in before yesterday's midday deadline. It was a few minutes late, so now the standard Ukip cycle repeats itself: incompetence, recrimination, temper tantrum, possibly a court case or two, then an uneasy truce. Soon something else will set it off. And then the cycle will be repeated. Because Ukip's political failures are uncannily mirrored by its personal failures.

Nigel Farage resigned on July 4th. The National Executive Council announced the rules for the leadership contest shortly afterwards. And yet somehow Woolfe still found himself submitting his candidacy right up against the midday deadline on Sunday, like a teenager handing in an assignment. On the other side of the digital line, Ukip's party operations were, according to Woolfe, "not working for the party". The IT system froze, he says, and it wouldn't process it.

An incompetent leadership contender and/or an incompetent party system. It's that type of culture which might explain the current predicament we now find ourselves in. Many members of the public put their faith in Ukip's account of the European Union and the single market. But now Ukip has got what it wants its analysis looks as shambolic and inept as Woolfe's time management.

Ukip wants us out the single market, even though Leave voters didn't specifically express this view and have not given it a mandate. But no matter. Ukip wants us out. And yet it has no answers to what we would do next. Would we drop all subsidies and see certain sectors, like agriculture, basically cease to exist? Or would we keep the promises made during the referendum to maintain them? Would we keep the tariffs we have with the EU? Would we keep regulatory equivalence?

Who knows? These are big questions. They define the type of country you are. But were Ukip to answer them, it couldn't maintain its impossible position of being all things to all people – red meat free marketers to Tory voters and socialist cultural nativists to Labour voters. So instead it whips up hatred and resentment for a bit then runs away, as Farage did immediately after the referendum. If you put Ukip in charge of something – from an application form to a country – it will mess it up.

Woolfe's response to the deadline story is revealing, in that he blames everyone but himself.

"I didn’t expect to spend 30 minutes at the bank, talking to them on the phone, 40 minutes to press a button for our own systems and it proved to me what I've said in this campaign, that the party systems and operations have not been working for the party and this system has had complaints before and we really need to professionalise," he told the Today programme this morning. A court case is possible and Woolfe refused to rule it out. His allies say he's the victim of a "coup" and they expect a "weighted" vetting panel to block his candidacy tomorrow.

This is par for the Ukip course. The party is like a bag in which various rats fight to the death. Douglas Carswell, its only MP, despises Farage, its leader. Suzanne Evans, who many consider the ideal leader to pull Ukip into the mainstream, couldn't apply for the leadership because she was suspended from the party for criticising Farage, who at the time was in the resigning period of his unresigning timetable.

Internecine battles are a core part of Ukip's history from its very earliest days. Indeed its own founder, Alan Sked, says the party was taken over by the far-right when Farage took over and should now disappear.

Whenever anything bad happens in Ukip, it's always someone else's fault. Woolfe blames the party's computer systems, his allies blame a cabal of insiders, Carswell blames Farage, Farage blames everyone else. That, in a nutshell, is the party's internal culture.

Now we've realised there is something going wrong with the political decisions this country has taken. It has allowed wages to become uncoupled from productivity, it hasn't built enough houses and is cutting funding to public services. Ukip's solution – surprise, surprise – is to blame someone else.

The immigrant was the scapegoat for all our problems. There aren't enough houses, so Ukip blamed immigrants for taking up stock. Not enough schools? Immigrant children were taking all the places. Long NHS waiting times? Immigrants using space. Low income? Immigrants drive down wages. Held up in traffic? Too many immigrant cars on the road.

In actual fact, immigration does the precise opposite to all this. It makes maintaining public services easier and improves median wages. But that doesn't matter. It is the political expression of the party's pathological inability to take responsibility for its actions.

Bill Etheridge is one of the other candidates to be Ukip leader. His plans include bringing back hanging, banning any inmate from receiving prison visits or leaving their cell for the first six months of their sentence, and a yearly £40,000 fine on prisoners until their assets are depleted. That's the kind of politics you come to expect from Ukip politicians.

How did Etheridge ever end up in Ukip? Well, he resigned from the Tory party after facing a disciplinary procedure for having posed with a golliwog doll.

This is not unusual for Ukip. Countless candidates pulled up for appalling comments in the media are rejects or exiles from other parties. And that goes all the way to the top, with Neil Hamilton – disgraced in Westminster, now parachuted in to the Welsh Assembly. This is the quality of person we see from Ukip: the candidate who wanted to kill his Tory rival, the one who called Mo Farah "an African", the one who said older people don't like homosexuality, the donor who said women couldn't be raped by their husbands.

Most of these people were thrown out of other parties, or left under a shadow of suspicion, before being welcomed into the Ukip fold. When they make these types of statements, many of them are defended by the leadership. Farage defended the homosexuality comment, like he did the man who talked about "poofters" and a "chinky bird", or the council candidate doing a Nazi salute, or the aide who said Ukip needed to represent Britain's "hundreds of thousands of bigots".

Of course, this is all dressed up as political-correctness-gone-mad, when in fact it is a question of common decency. How do you conduct yourself, no matter what your politics? How do you treat your fellow man, no matter what his politics? What kind of language do you use, and what kind of effect would you like to see from having done so?

We have a pretty clear answer to those questions given the way the Ukip leadership behaves. And now we see how that translates into political practice. Ukip unveiled a poster which would not have looked out of place in the Nazi era during the referendum. Farage warned of violence in the streets. He aped the far-right's argument that immigration would trigger a spate of sexual attacks against women.

And then the violence and hatred started. The murder of Jo Cox. The bile online. The extraordinary spike in hate crime and racist assaults in the wake of the referendum – highest where the Leave vote was strongest. That's where this type of talk gets you. Ukip talks like this. And now look where we are.

These incidents may seem shocking, but they are merely the formal political expression of the Ukip personality. They reflects its hatefulness, like other aspects of their political programme reflects its incompetence and failure of personal responsibility. Everything you need to know about Ukip's politics is discoverable by the psychological failings of those who work for it.