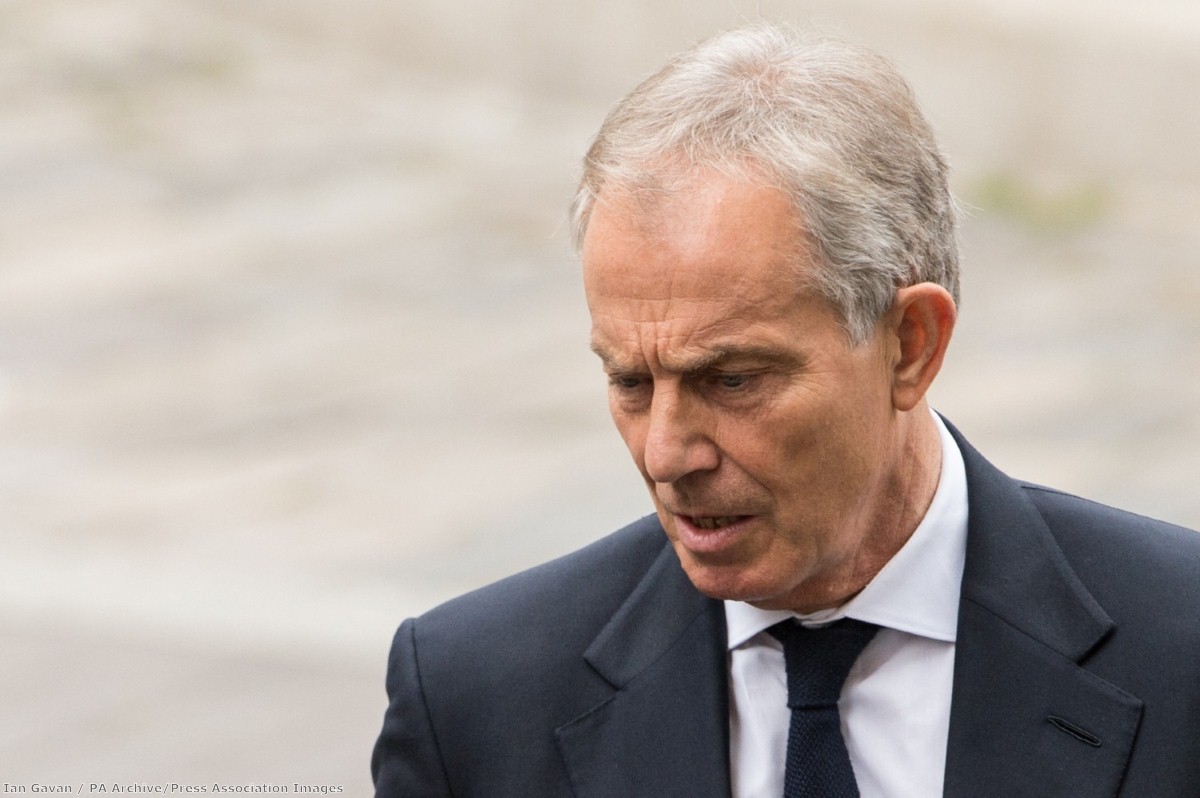 The decision which will forever define Tony Blair's reputation was taken very early on. It was probably a small decision, one he barely thought about. It was likely instinctive. Immediately after September 11th, the prime minister decided to stand "shoulder to shoulder" with the US as an "essential demonstration of solidarity with the UK's principal ally".

That's the evaluation of the Chilcot report, published this morning after a seven-year process. What follows from that decision is a betrayal of almost every imaginable value the UK holds. It betrayed its commitment to international law, its system of government scrutiny, its duty of honesty to the British public, its responsibility to the people of countries in which it interferes, its own long-term policy interests and British armed forces personnel.

At each stage, Blair tried to prevent unilateral US action and keep the international community together. This was an honourable intention. And he did secure some successes. Nor is he the main villain. That's George W Bush and the despairingly idiotic and arrogant men around him, who were intent on war at any cost and so full of their own sense of power that they failed to see how their actions would forever tarnish their country’s reputation.

But the fact that Blair tried to make the best out of a bad scenario does not excuse him. The findings against him in the Chilcot report are damning. His decisions contributed to an unimaginable foreign policy disaster.

Blair's efforts to ally with the US were compromised from the start. They wanted regime change. But consistent British legal advice meant he could not support them in that, and had to aim only at disarming Iraq.

As early as December 2001, Blair sent Bush a note on the second phase of the "war on terror", in which an argument could be built over time to that "military action could be taken if necessary". He wasn't committed to military action yet, Chilcot found. But he was committed to steps which made intervention possible.

Already the Americans were treating him dismissively. He didn't know it, but while Bush was humouring him he was also asking General Tommy Franks, commander in chief at US Central Command, to review military options for removing Saddam Hussein, including ground invasion.

By February 2002, Britain had figured this out. Sir Richard Dearlove, chief of the Secret Intelligence Service, concluded the US was drawing up plans for a military campaign. By July, he was sure the US had decided on military action and "the question was only how and when".

Blair wrote a note to Bush saying: "I will be with you, whatever."

Britain then did everything it could to get the UN on board. It constructed a resolution so deliberately ambiguous – particularly on the level of non-compliance from Iraq which would trigger action, who would make that decision, and what the action would be – that it could pass. This was viewed as a major British success.

The irony is that the UN route was working. Iraq complied with the resolution. Inspectors were getting what they wanted. Hans Blix was realising – as we would all soon realise – that "perhaps there was not much WMD [weapons of mass destruction] in Iraq after all”.

It didn't matter. The US had limited patience with the UN. Blair did not wield as much influence with Washington as he imagined. There was nothing Iraq could do to avoid war. It said it had no WMD programme. But Jack Straw, then foreign secretary, replied that if it continued with "this obvious falsehood" it was rejecting peace.

We now know they had no WMDs. But really, it didn't matter. The Americans wanted a war, so they made it happen. Blair's red line on multilateralism came to nothing.

In the end he accomplished the precise opposite of what he intended to do. Instead of firming up the international community, he had actively subverted it. By trying to fit whatever legal mechanisms were available to him to a pre-existing policy agenda. Britain and America had tried to invent a legal case for war and when it became obvious that it was logically untenable, they went ahead and did it anyway.

Then, in early March, that all changed. Suddenly he concluded war was legal, because Iraq was in material breach of resolution 1441. There was no need for a second resolution. This is why 1441 was so usefully ambiguous. Now they could pretend that it offered an authorisation for war. The truth is, that could have meant anything.

What was the legal basis for saying Iraq had failed to take the "final opportunity" to disarm? Who was to decide that? Evidently not the Security Council, because it did not agree. So it would be the prime minister himself, like some sort of tinpot dictator. The advice was sent to Downing Street, whose "perfunctory" response was set the next day. "No formal record was made of that decision and the precise grounds on which it was made remain unclear," Chilcot says. "If the matter had been left to the Security Council to decide, military action might have been postponed and possibly avoided."

Blair told the Chilcot inquiry that the disasters which hit occupation forces in the aftermath of the invasion were only clear "in hindsight". This was false. As the inquiry found, Blair himself had already identified many of them. "The conclusions reached by Mr Blair after the invasion did not require the benefit of hindsight," it found.

Blair was warned what would happen. He was told the post conflict phase would be 'strategically decisive', that internal conflict was likely, that there would probably be a huge social, political, economic and security upheaval, that there were no credible US plans for the post-invasion period and that the UK would have "great difficulty" sustaining its contribution.

Among his many failures Blair did not establish clear ministerial oversight of post-conflict strategy, or ensure ministers took decisions to address it, or seek adequate reassurances that the UK could meet its obligations, or test British strategic objectives against anything but best case scenarios, or press Bush for definite assurances on US policy or seek advice on the absence of a satisfactory plan for UK objectives.

Early on Blair had promised the Americans that the UK would take a "significant military role", but he made no decisions on what kind of military package would be offered to the US for planning purposes.

"His omissions increased the risk that the UK would be unable to respond to the unexpected in Iraq," Chilcot found. "They reduced the likelihood of achieving the UK's strategic objectives".

The consequences were severe.

The warnings Blair had received – from experts, from committees, from foreign leaders, from protestors – were correct. The war was a disaster.

British forces entered Basra without instructions on maintaining peace, despite the anticipation of lawlessness. There were no rules of engagement.

Then the looting started. Brigadier Graham Binns had to make his own judgement about what to do. He concluded that "the best way to stop looting was just to get to a point where there was nothing left to loot".

The same thing was happening in the capital. And from there it spread across the country. A year later, the prime minister's special representative on Iraq concluded that the failure to crack down on looting in Baghdad released a crime wave "the coalition has never been able to bring fully under control". Sir Mike Jackson reported that "looting, revenge killing and subversive activities are rife… Should a bloody and protracted insurgency establish itself in Baghdad, then a ripple effect is likely to occur". That is precisely what happened.

The Americans effectively dismantled the Iraqi state. Things fell apart. There were food, water and power shortages. The absence of a political process ruined the relationship between UK forces and the local population.

The terror attacks gradually became more sophisticated, until, by Spring 2004, it was probably too late. Chaos engulfed Iraq. Some 200 Iraqi citizens were being killed in attacks every week. A US military onslaught in Fallujah alienated sunni Arabs, while reports of its abuses in Abu Ghraib robbed it of any remaining legitimacy. This was the turning point.

But nothing changed. The same absence of thought exhibited by Blair in the preparation for war was exhibited during it. “No substantial change in approach was ever implemented”, the inquiry concluded. A “candid reappraisal of policies… did not take place”.

Most damning of all perhaps is the effect on equipment. The lack of preparation is staggering.

Britain decided to increase combat forces just weeks ahead of the invasion. When this decision was made, they knew they were already stretched by participation in the Afghan war.

This decision "compressed the timescales available for preparation". Sending out forces more quickly than anticipated – to suit a US military timetable – "meant there were some serious equipment shortfalls". These shortfalls were exacerbated by a lack of adequate oversight.

The British military had major gaps in its equipment, particularly on protecting troops against IEDs, as well as intelligence, surveillance, target acquisition, reconnaissance and helicopter support. No-one in the Ministry of Defence was put in charge of identifying these gaps. Troops went out on patrol in unprotected vehicles, vulnerable to IEDs, because of this lack of planning and oversight. "It should not have been tolerated," the inquiry found.

So while Blair was making inspiring speeches about the war on terror and the need to overthrow dictatorships, he failed to ensure adequate preparation for a war he knew was coming and which he was actively trying to make possible. His political tactics eroded the values which Britain claimed to be pursuing, namely a commitment to the rule of law and a duty of honesty to international allies, parliament and the public. Meanwhile, the failure to do the actual work required for an occupation, or to listen to advice, meant the British military adventure was a terrible failure. The price was countless British and Iraqi lives. As predicted, it destabilised the region and precipitated the conditions we see there today.

Everything Blair did stems from that initial decision to stand "shoulder to shoulder" with the Americans. The repercussions of it are so severe, the number of lives lost so extensive, that his reputation should never recover. The Chilcot report is one of the most damning assessments ever made of a British prime minister.