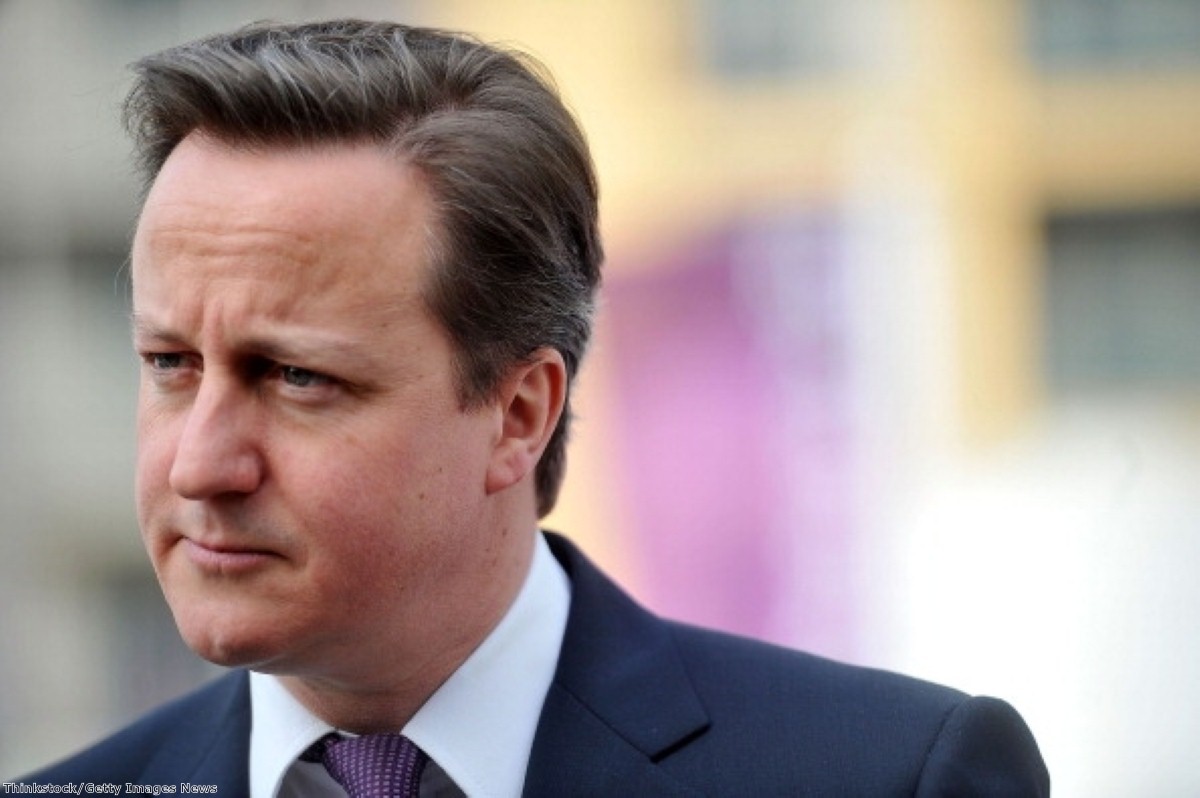 Even by the standards of general election campaigns, the Conservatives continue to act in a highly disreputable manner.

Ed Miliband will make his first and probably last foreign policy speech of the election today, laying out, among other matters, the failure of post-war planning in Libya, the subsequent collapse of the country and the ensuing tragedy of the migrant boats coming to the EU.

Senior Tory sources seized on a section suggesting Cameron was responsible for each stage of this process. It was an example of Labour's "negative and personal campaign". Miliband is accusing the prime minister of "murder", they said. Online, Tory supporters described it as "cruel" and "nasty".

What did Miliband say to justify such a frenzied response? See for yourself:

"In Libya Labour supported military action to avoid the slaughter Gaddafi threatened in Benghazi. But since the action, the failure of post-conflict planning has become obvious. David Cameron was wrong to assume that Libya's political culture and institutions could be left to evolve and transform on their own.

"What we have seen in Libya is that when tensions over power and resource began to emerge, they simply reinforced deep-seated ideological and ethnic fault lines in the country, meaning the hopes of the revolutionary uprisings quickly began to unravel. The tragedy is that this could have been anticipated. It should have been avoided. And Britain could have played its part in ensuring the international community stood by the people of Libya in practice rather than standing behind the unfounded hopes of potential progress only in principle."

Plainly Miliband did nothing he was accused of. The negative campaigning and underhand tactics are disproportionately coming from the Conservatives. From Michael Fallon's stabbed-his-brother-in-the-back attack, to the efforts to turn English against Scottish, this has been a particularly pernicious and damaging election fight.

As it happens, the migrant boat deaths are the responsibility of David Cameron and UK government ministers, but not because of Libya. Last October, in a policy statement which David Cameron now studiously ignores, Foreign Office minister Lady Anelay said the UK did not support search-and-rescue efforts in the Mediterranean because it encouraged more to try to get here.

"We do not support planned search-and-rescue operations in the Mediterranean. We believe that they create an unintended 'pull factor', encouraging more migrants to attempt the dangerous sea crossing and thereby leading to more tragic and unnecessary deaths."

Outside of a small Twitter outcry, the announcement did not trouble most newspapers or TV news channels. It certainly did not merit a mention from many politicians. But without funding, Italy's Mare Nostrum operation came to an end and was not replaced. This search-and-rescue op, which stretched all the way to the Libyan coast, had saved 150,000 lives over a year. Instead, an EU border patrol operation called Triton was set up. Humanitarianism turned into securitisation.

Since then, human rights groups say the death rate has increased 50-fold. The numbers of those who died so far this year is thought to be well over 1,000. In the same period last year it was 17.

So UK ministers are partly but directly responsible for migrant boat deaths and Cameron, as prime minister, shares that responsibility. The Tory sources say Labour is 'politicising' the issue. It plainly is not, but the issue nevertheless deserves to be politicised. After all, it was a political decision to end support for search-and-rescue. Yesterday Cameron told journalists outside the EU meeting that Britain "is always there". It’s simply not true. We're not. Cameron is the latest in a long line of British leaders who find it easier to issue that type of rhetoric than it is to act upon it.

And yet Miliband is not making this point in his speech. There are very few votes to be won in taking a compassionate and principled stand on refugees. Instead, he focused on the failure of post-war planning in Libya.

An RAF pilot prepares for a mission over Libya. Miliband has hardly discussed foreign policy since becoming Labour leader.

His argument does not bear much scrutiny. Miliband's own concern about Libya is frankly dubious. His speech today, the first on foreign policy he has made in years, is not really about Britain's role in the world. It is an attempt to play the statesman, to make it easier for him to pass the 'blink test' of voters imagining him in Downing Street.

It is a shame to see Britain's interest in the world so diminished that leaders only bother talking about it so they can placate concerns over their image. The Labour leader has had precisely nothing to say about foreign affairs during his time at the head of the party so he will have to forgive us now for not taking his late concern about events overseas particularly seriously.

While his goal of robust multilateralism may be compelling, his own actions in foreign affairs have not lived up to his current rhetoric. His one achievement – to stop intervention in Syria – is now touted as an example of the Labour leader standing up to the might of the American war machine. That was not what it was like at the time. Back then, Miliband put forward a motion which was almost identical to the government's one and then split the vote supporting it.

It was not some principled stance against intervention. It did not even refer to any specific difference between the government position and the opposition one. It was a sort-of proactive avoidance of decision-making, a world-class fumbling of the ball, later to be dressed as high principle.

But the children killed in chemical attacks in Syria were no less dead. And Assad went on with his butchery as the international community stood limply to the side.

For Miliband to swagger on stage and talk about foreign policy when he has ignored it for years is almost as desperate and pathetic as the Tory attacks on his personality which it has provoked. Neither he nor his critics have much to offer on the subject. And it is telling that Miliband is unwilling to go on the offensive over the real moral disgrace – the UK's decision to end its support for search-and-rescue.

The Tory sources putting words in Miliband's mouth are closer to the truth than they realise.