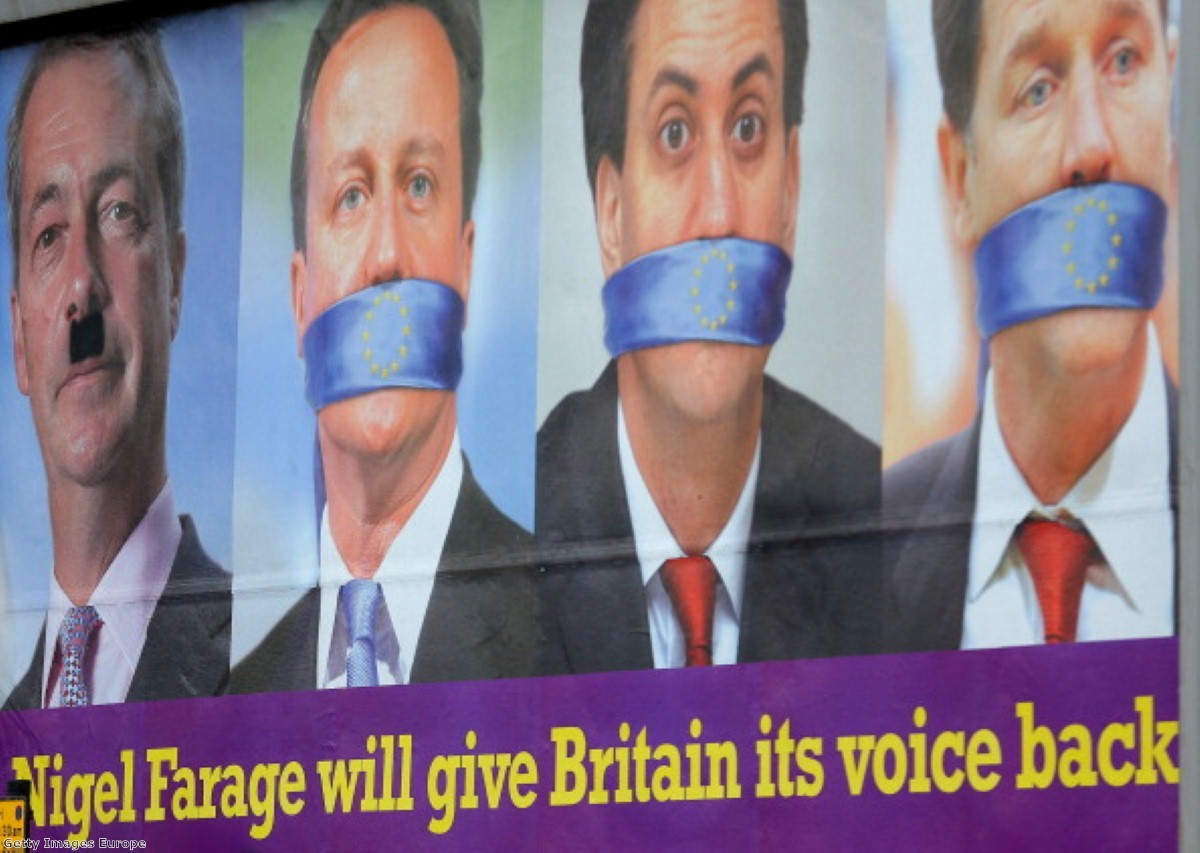 2014 was the year the two main political parties died

This was the year the two main parties died as the dominant force in British politics.

The death has been long coming. Support for the main political parties has been in decline for decades, but 2014 was the year their funeral rites were finally read.

Until recently, the waxing and waning fortunes of Labour and the Conservatives was still the only show in town. In the great British political theatre, the smaller parties were reduced to bit-part roles if they featured at all.

This was the year that all changed. The rise of the smaller parties has completely defined the national conversation in 2014 and now looks set to decide the outcome of next year's general election as well.

In fact you have to go a long way down the list of our most popular stories in order to find any mention of either David Cameron or Ed Miliband at all.

Nowhere is this trend more clear than at prime minister's questions.

Although widely seen in Westminster as the big political event of the week, it is increasingly viewed as an irrelevance outside of it. In our list of 400 most read articles this year, our most read review of prime minister's question comes in at number 398. Here it is in case you want to read it, (which apparently you don't.)

It's not that we haven't written about David Cameron or Ed Miliband. We have. It's just that the public have become increasingly uninterested in what either of them have to say.

The rise of Ukip

Of all the smaller parties it has been the rise of Ukip which has been most talked about in 2014. At times the press and broadcasters have come under attack for the sheer scale of their coverage of Nigel Farage's party. However, our statistics suggest that there is some justification for it. Despite the complaints, this is still a story that lots of you want to read about.

Here's a list of our top five most read Ukip-related stories.

2. Ukip's European election results were not as good as they seem

3. Ukip's secret weapon: Has Nigel Farage cracked the code to 2015?

4. Ukip's Lenny Henry candidate wasn't even born in the UK

What's telling is that this interest in Ukip appears to come both from the party's supporters and their detractors, with stories about their success almost as popular as stories about their failures. The same cannot be said of our coverage of the biggest two parties.

The rise of the SNP

The rise of Ukip has arguably changed the country for the worse this year. However, the rise of the SNP very nearly broke it apart altogether.

This is not a new story The rise of the SNP and the decline of the Labour party in Scotland has been going on for years now. However, the independence referendum and particularly the polls suggesting the result was on a knife edge, turned the eyes of the whole union and the rest of the world, onto the story. That interest continues to this day with the rise of the SNP set to be one of the deciding factors in next year's general election.

This spectacular ascent is all the more remarkable given that the biggest political event of the last year was a referendum which the SNP actually lost. Rather than kill off the party, the defeat of the '45' has actually given the SNP an incredible boost.

George Orwell once described the English as a nation which only remembers and glorifies in its defeats. This now looks like a much better description for the Scottish nationalists.

2. We have witnessed a total breakdown in political legitimacy

3. How Salmond won the referendum

4. Everything you need to know about the Scottish independence referendum

5. Salmond's nationalism is as ugly as all the others

The rise of the Greens

Although Ukip and the SNP have dominated politics this year, the rise of the Greens looks set to be a smaller but still significant factor in next year's general election. If the party wins a place in some or all of the televised election debates that influence could grow. The Greens have not yet caused a big upset in British politics. 2015 may well prove to be their year.

Here are the top five most-read stories about the party in 2014.

1. The Green party are now the real threat to Labour.

2. Could the Greens provide the real upset of the European election

3. Labour are losing votes to the Greens and they don't know why

4. Are the Greens the only left wing party in Britain

5. Why aren't the Greens in the TV debate?

The Scottish Sun newspaper once warned their readers that voting for the SNP would put the country in "a noose" and even featured a picture of said noose on their front page.

Later, when a hung parliament looked likely in 2010, the Sun ran a graphic showing Britain literally being throttled by the smaller parties. The day before the election they warned their readers that David Cameron and the Tories were their "only hope".

None of it worked. The SNP continued to climb in the polls and the public denied Cameron the majority government he'd hoped for. Five years of unbroken coalition have followed as a result.

In 2010 the prospect of a coalition government seemed an either exciting or terrifying thought, depending on your perspective. Now it has become the norm.

This realisation has been like a dam breaking. The British public no longer believe that voting for one of the smaller parties will throttle the country. The two main political parties have yet to wake up to this and are set to spend the general election campaign arguing variously that voting SNP or the Greens will let in the Tories or voting Ukip will let in Labour.

After the year we've just had, these arguments now sound like voices from a forgotten age.