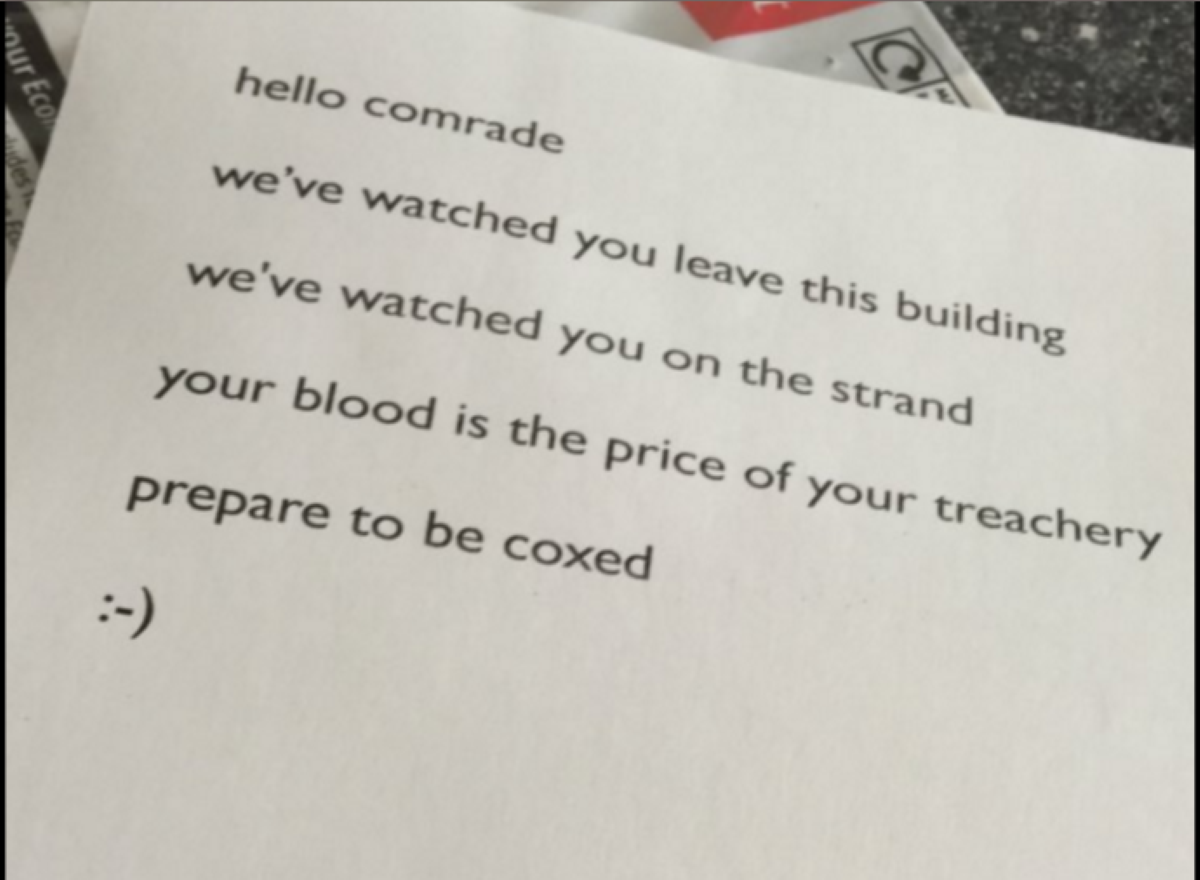 Your blood is the price for your treachery, prepare to be coxed." These are the words that a former Labour parliamentary candidate saw when he opened a letter hand-delivered to his home last week. It's thought the term 'coxed' refers to the recent murder of MP Jo Cox.

Kevin McKeever, who stood as the Labour candidate for Northampton South in 2015, immediately reported the letter to the police and later decided to tweet about it to show just how toxic political debate has become. A string of Labour MPs have spoken out to condemn the threat but McKeever continues to receive abuse on social media. So, why is a relatively low-profile member of the Labour party attracting such negative attention?

It began when an article was published by the left-wing website the Canary, last month. It claimed that the PR firm Portland Communications, where McKeever works, was behind the coup against Jeremy Corbyn, and it suggested McKeever was involved. He says the claims were so far-fetched, that to begin with it was almost amusing. But then the article started to be more widely shared and people seemed to be believing it.

"People's mates, who we thought were quite sensible, were giving it credence," McKeever says.

Comments on Facebook and Twitter show that many people believed the Canary had uncovered some big conspiracy that the rest of the media had somehow missed.

"Great reporting. All these Portland employees must be up to their necks in manipulating the Labour Party. Disgraceful," said one.

"Investigitave journalism at it's best [sic]," another claimed.

One suggested that there "should be a criminal investigation". Although quite what crime was supposed to have been committed is anyone's guess.

Two days after the first article was published, the Canary put out another. McKeever was named again. The allegations were along the same lines, and by now many Corbynites were convinced that he had played a part in trying to bring down their leader.

"And now we know @kevinmceever of Portland Communication is chief rat behind the coup," tweeted one person, while using the hashtag #CorbynStays

Another, commenting below one of the articles on Facebook, labelled McKeever a "blasted traitorous creep."

"I started receiving a lot of trolling and harassment," McKeever says. "It was unprecedented for me. Obviously I'm not high profile, so I'm not used to that level of exposure."

He believes this type of behaviour pre-dates Corbyn's leadership and says that we're now in a kind of "post-fact, post-intellectual public debate", similar to what was seen during the EU referendum and also in the US.

"If somebody doesn't agree with you, they can't just be opposed in principle, they're seen as wrong and evil. That's what's happened with all this leadership stuff," he says.

"Instead of it just being me not thinking Corbyn is a potential prime minster, it's that I'm part of some corporate coup with 170 Labour MPs somehow doing what they're told. It's ludicrous. And of course, Sky and the BBC are not covering it because they are all part of the MSM conspiracy,” he jokes.

It's the same trend we saw during the Brexit campaign, where one conspiracy after another was trotted out to shut down any serious debate. It resulted in a campaign on social media urging Brexiteers to use a pen instead of a pencil at the ballot box to stop MI5 from altering their votes.

It's easy to make light of this, but there is a darker side to it, as McKeever discovered when he opened that letter last week. Coming so soon after the death of Jo Cox, it was impossible to just laugh it off. Somebody knew where he lived and had watched him in the street. It was terrifying.

"The immediate effect was that I stopped saying anything publicly at all", he says. But after thinking about it some more he decided he should speak out.

"It's more than likely a politically motivated malicious note designed to shut down me commenting. I just thought if I stop saying anything it has had the desired effect. Which is why I posted a picture of it online."

But even the sight of such a chilling threat wasn't enough to stop some people. Among all the messages of support there were a few who seemed to believe that it was all set up to get attention.

"You seem to have recovered from that 'threat' quickly? Didn't get the attention you desired?" asked one person.

"Snivelling arsehole tries to stab leader in the back, cries he is picked on, and then attempts victim status," tweeted another.

McKeever is by no means alone. He says MPs that he knows are far from surprised by the treatment he's received. Yesterday there were reports that a brick had been thrown through leadership candidate Angela Eagle's office window. She was later forced to change a venue she was due to speak at because of a threat. There is a daily stream of abuse aimed at politicians from all sides on social media. Corbyn himself says that he has recently received death threats. With Labour now entering what's set to be a vicious leadership contest, it’s likely the abuse will intensify in the coming weeks.

"A split [in the party] is not inevitable but I think it's possible." McKeever says. "Which is why I think people need to be careful about marching too far down a road of argument and having this hysteria on both sides which means they can't back down from it."